​Arsenal beat ​Stoke City 3-0 at the Emirates Stadium, as Arsène Wenger’s side produced an impressive end to the fixture to overturn the Potters.

Pierre Emerick Aubameyang opened the scoring late on for Arsenal, cooly slotting home a penalty after a clumsy foul in the penalty area by Bruno Martins Indi.

The Gabonese goal machine doubled his side’s lead soon after with a precise finish, before substitute Alexandre Lacazette sealed the win with another penalty late on. The Potters took a surprisingly positive approach to the opening moments, closing down their opposition players at every opportunity, as Arsenal looked to dominate the game.

Within the first five minutes, the visitors had the first chance of the match. After some neat interplay around the penalty area, The home side began to find their stride, with Mesut Özil causing the Potters’ defence problems with his tenacious dribbling skills.

As the half-time whistle approached, the discontent in the stadium was palpable – as the north London side continually squandered possession.

Calum Chambers then had a fine opportunity to give his side the lead, but his header from Özil’s pinpoint cross drifted wide of the Stoke goal. Soon after, Chambers drifted another header over from a similar position. confidencethe Potters started to make defensive errors. Substitute Lacazette lifted the home fans, as he looked to make an impact.

Arsenal come close with some nice build-up play! This game’s in danger of coming to life..

False alarm, the game has returned to a pedestrian speed..

Aubameyang should have scored moments later, as he surged through on goal from a glorious Ozil pass, only to see Butland stand tall and repel his tame effort. Lacazette had a near-post effort scrambled wide by the visiting defence, before Chambers missed yet another golden opportunity from the resulting corner, missing from five yards out when unmarked in the area. 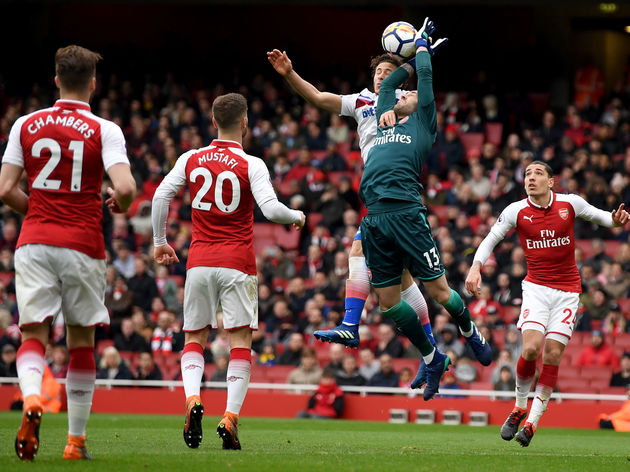 In the 74th minute, Arsenal’s increased pressure saw them rewarded, as they were awarded a penalty following a clumsy tackle by Bruno Martins Indi or Özil. Aubameyang sent Butland the wrong way with the spot kick, deftly rolling the ball into the bottom right corner of the net, before performing a celebratory forward flip in front of the relieved home fans.

As the game approached its final 10 minutes, Arsenal looked to build upon their lead. Substitute forcedstormed

Soon after, Butland made two terrific saves from the Arsenal attack. The England international firstly blockedover

Arsenal rounded off the win in the 89th minute, as Lacazette fired home a penalty after penalty

 Here is your #SCFC side for today’s @premierleague game against @Arsenal: