​Arsenal recorded a famous European comeback as they beat Rennes 3-0 at the Emirates Stadium to progress to the Europa League quarter finals on Thursday night.

Pierre-Emerick Aubameyang gave Arsenal some early hope with a goal after just four minutes, when Aaron Ramsey was found by Ainsley Maitland-Niles, who in turn found the Gabon international with a cute low cross, who did the rest from a few yards out. And all three were involved again when the Gunners notched their second. Aubameyang broke down the left flank then cut the ball inside to Ramsey, who looked to initially put Sead Kolasinac in with a ball in behind, but the Bosnian knew he was offside so didn’t play for the ball.

Aubameyang didn’t though, and despite replays showing he may well have been (no VAR in the Europa League, remember), he latched onto the ball just before it crossed the whitewash and clipped in an inviting cross for Maitland-Niles to bury with his head.

As expected, the visitors mounted more of an attacking effort in the second half, as they sought out a game-changing goal, but their decision making in the final third was sloppy and the Gabonese forward snuck a tap-in in the 71st minute to all but seal their progression to the last eight.

As the clock ticked down, there was just time for some vintage Hatem Ben Arfa dribbling skills, some heroic goalkeeping from Rennes alumni Petr Cech and some wayward finishing from Adrien Hunou, but it remained Arsenal’s night.

Check out a full breakdown of the game below.

After such a calamitous showing in the first leg, Unai Emery’s side knew some wrongs needed to be righted. And Emery, as the resident Europa League specialist (a mantle he’d probably rather pass on now he’s left Sevilla), duly delivered.

The endeavour and speed showed at the start of the game couldn’t have been further from the dross of a week ago, and while ​Alexandre Lacazette showed his worth after his proposed ban was lifted for this game, it was his handshake partner up front who ran the show. 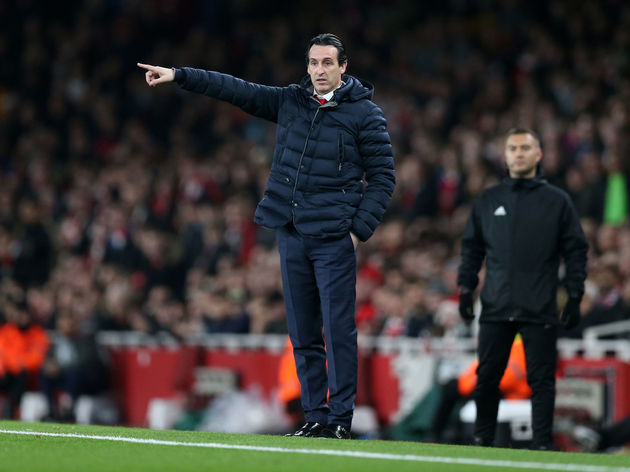 Yet, having got the two crucial goals, it became just as much about the defence as the attack, as Laurent Koscielny, with Cech behind him, stood firm to deny some heavy French pressure in the second period.

Following their exploits against Manchester United in the league on Sunday, this caps an excellent week for the Premier League side, as they continue their charge for ​Champions League qualification on both fronts.

STAR MAN – ​Pierre-Emerick Aubameyang. As the Gunners tired in the second half, allowing Rennes a far greater foothold in the game, it only served to highlight the electricity of the forward in the opening stages.

And, after coming through this pressure, it was only fitting that Aubameyang had the final word – which, if in actual word form, would presumably have been a resolute “Wakanda forever!”

Aubameyang can sign a new deal because of the mask.#NoRules

Yes, that’s right, after utilising the masks of Spiderman and Batman for so long, the 29-year-old swapped those has-beens for a more modern hero – Black Panther.

Aubameyang did that celebration and instantly missed two good chances. Looking like T’Challa when Killmonger showed up.

No matter if he missed two gilt edged chances to get his hat-trick after that, he was still the home side’s real-life hero on Thursday night.

With their proposed Premier League clash with Wolves this weekend postponed thanks to the Wanderers’ FA Cup quarter final involvement, ​Arsenal can look forward to a fortnight’s rest and recuperation, with no game until April 1st against Newcastle following the international break.