Arsenal threw away a lead on Mikel Arteta’s home debut, slipping to a 2-1 defeat to London rivals Chelsea on Sunday afternoon.

The Gunners took the lead on 12 minutes, as Pierre-Emerick Aubameyang powered home a header from close range after Calum Chambers had flicked a dangerous corner into his path. ​

The hosts continued to completely dominate the first half, pressing Chelsea and forcing countless errors from Frank Lampard’s side.

However, for all Arsenal’s obvious improvement, the Blues grew into the match after Lampard changed tack in the second half, and the introduction of Jorginho steadied the Chelsea ship.

Arsenal tired as the game wore on, and the pendulum swung in the visitors’ favour when Bernd Leno misjudged a floated free-kick, allowing Jorginho to level the scores into an empty net.

Tammy Abraham then completed the late comeback when the Blues broke away, and the young English striker converted from close range to leave Arteta without a win in his first two games in charge.

A real game of two halves. The ​Arsenalbegun under new boss Arteta, and they are already some really positive signs of improvement since Unai Emery’s departure. The most notable green shoots came from their clear organisation and structure, which were severely lacking during the previous reign. Arsenal pressed high up the pitch, penning Chelsea into their own half for large periods, and when in possession the Gunners moved with intensity and intent. However, the old problems reared their ugly heads as the match progressed, as individual mistakes and a lack of defensive balance cost Arteta all three points.

The home crowd were left in disbelief by the capitulation, but they must seek the positives that they witnessed during the first hour of the match.

STAR MAN – If there is one man who epitomised the change in tempo and morale around the Emirates Stadium in the first hour, then it has to be Mesut Ozil. The German playmaker was back to his mesmerising best on Sunday afternoon, drifting in between lines, linking up with teammates beautifully and playing intelligent one-touch passes to set off their attacks. 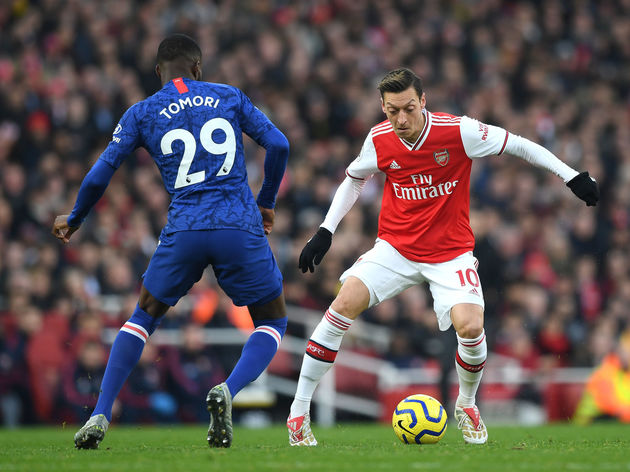 It was an absolute masterclass in working the space and becoming un-markable by the previously out-of-favour star, and Chelsea simply couldn’t handle his movement in and out of possession. ​Ozil wasn’t afraid to put in the hard yards either, cutting passing lines and adhering to the role Arteta had set for him.

There is a long way to go in the Arteta era, but early signs suggest that Ozil is on the same wavelength as his progressive boss.

Well, you cannot accuse Frank Lampard of being a shrinking violet. ​Chelsea were completely dominated by Arsenal in the opening half-hour, and having gone a goal down and conceding three yellow cards, the Blues boss had seen enough. Wing-back Emerson was substituted in the first-half as Lampard regrouped, hoping that Jorginho’s introduction would help his side to get a foot on the ball. Chelsea certainly got a grip of the match following the change, and they combatted Arsenal’s aggressive style well as the game progressed.

STAR MAN – How did Jorginho not start this match? The Italian playmaker is clearly considered to be the most dispensable of Frank Lampard’s midfield options, but his introduction saved the Blues from being completely overrun on Sunday. It’s no exaggeration to say that Jorginho held the team together in its hour of need, and dragged his side back into contention. The ​ex-Napoli man was tidy and efficient in possession – if not extraordinary – and his calming influence slowed down the waves of attacks from the rampant Gunners. It was his goal which levelled proceedings, and the Blues went on to claim all three points.

Arsenal fans will fall hard-done-by that Jorginho did not see red during the match, but he was undoubtedly the difference.

Chelsea follow up their trip to the Emirates with a tricky visit to the Amex stadium, where Lampard’s men will take on Graham Potter’s ​Brighton.