Antoine Griezmann’s late goal punished Arsene Wenger’s Arsenal in the last four of the Europa League on Thursday night, as 10-man Atletico Madrid salvaged a 1-1 draw in the first leg of the tie between the two teams.

​It was Wenger’s 107th – and final – European home game as Arsenal manager, and while his players gave their all and thoroughly deserved victory, a defensive lapse in the final ten minutes means Arsenal now face an uphill task of reaching the final of the competition.

Atletico’s poor start was soon made worse when their full-back, Sime Vrsaljko, was sent-off inside ten minutes, 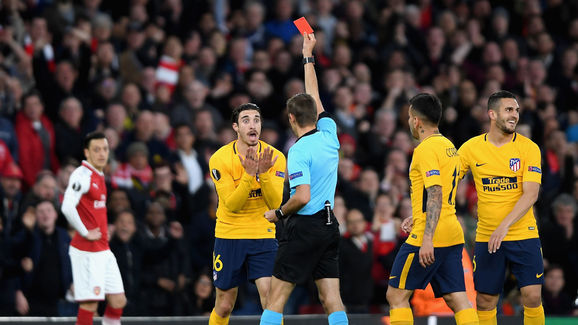 But it was Atletico who scored the next goal. A hopeful long ball forward was chased again by the relentless Griezmann, who this time got his reward – shaking off Laurent Koscielny to the through ball and lifting into the back of the net over the hapless Shkodran Mustafi at the second attempt.

1-1, and a crucial away goal for Atletico.