​Saturday’s action produced one of the finest saves in Premier League history; a remarkable moment that even the division’s finest goalkeepers would be proud of.

Rather surprisingly, it was Bournemouth centre-back Steve Cook who flung himself in front of the Norwich shot, acrobatically deflecting it on to the outside of the post with a grace we seldom even see from the world’s best shot-stoppers.

But Cook may have forgotten the world we live in. While the referee did spot his moment of majesty and madness, VAR would have intervened (well, probably) even if the miraculous save hadn’t been spotted, leaving the defender looking more than a little foolish.

However, Cook did inspire someone – us. The Bournemouth stalwart got us reminiscing about the rest of the best Premier League handballs of all time, so here they are: Despite a stellar career filled with unbelievable and breathtaking moments, this game is one ​Ronaldo may want to forget.

Back in a Manchester Derby in 2008, the attacker, having already been booked, jumped to head Wayne Rooney’s corner only to rather innocuously handle the ball with little disguise. Of course, Howard Webb brandished yet another yellow card for the Portugal winger and, despite Ronaldo’s strong denial of any wrongdoing – claiming he had heard the referee’s whistle – sent off arguably the Premier League’s greatest ever player.

Such was United’s dominance of this fixture in the 2000s, they still won the game 1-0. Now playing in the Australian top tier, Taylor has evidently felt the need to flee as far from British shores as possible to forget this moment of insanity.

In 2005 against Aston Villa, the centre-back made a wonderful goalline clearance with his hand, beating Darius Vassell’s shot away and seemingly being taken out from distance by a sniper in the crowd. Taylor proceeded to roll around on the floor in a rather flamboyant and dramatic manner, but his acting performance failed to convince the referee – who was quick to give the ​Newcastle man his marching orders. Doing his best to inspire his inner Diego Maradona, El-Mohamady decided it was his turn for a ‘Hand of God’ moment. Unfortunately for the Egyptian, he didn’t quite get away with it.

Back during his time at Hull, the defender got his hand on the end of a whipped delivery in to the box, redirecting the cross beyond the hapless Tim Krul. In an ultimate show of unsportsmanlike conduct, the now Aston Villa right-back wheeled away with unbridled joy and celebrated his idiocy without as much as a shred of remorse.

Luckily the eagle-eyed officials cut his lap of honour short, making the defender surprisingly angry about the ‘injustice’ he felt he had suffered. Karma is a bugger, hey? 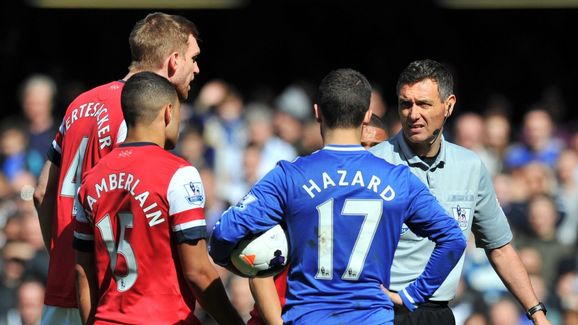 Not only one of the Premier League’s best handball moments, but also the greatest identity crisis in the division’s history.

​Oxlade-Chamberlain, then of Arsenal, needlessly handled Eden Hazard’s wayward shot on the line and as a result got sent off. Oh, but he didn’t. Andre Marriner’s ageing eyes told his brain that it was in fact Kieran Gibbs who committed the offence, electing to punish the left-back instead and allowing the Ox to watch his team crumble to an embarrassing 6-0 defeat at Stamford Bridge. Did you really expect a Premier League gaffe list without Phil Neville’s name on it?

Of course the defender got sent off for a 90th minute handball on the line in a Merseyside Derby. Of course it meant his side were to reduced to ten men and he conceded a second Everton penalty of the match. And – of course – Liverpool scored that penalty and condemned the Toffees to another heartbreaking defeat to their local rivals. 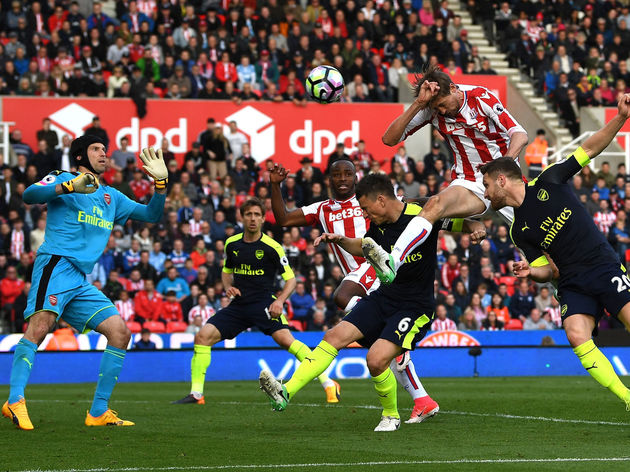 Despite a humbling 4-1 defeat to Arsenal, Crouch still stole the headlines after the two sides clashed in the Midlands.

You’d be forgiven for thinking that the 6’7 forward would need no advantage in the air, but the Stoke attacker still deemed it necessary to divert Marko Arnautovic’s cross in to the back of the net with his arm. The emphatic loss did take a lot of the heat off the former England man, but one of football’s nice guys showed that you have to play dirty sometimes in our beautiful game. Manchester City didn’t drop many points over the course of last season, but they did stumble against ​Wolves at Molineux. This was courtesy of Willy Boly’s wonderful handball goal that held the Citizens to a 1-1 draw against Nuno Espirito Santo’s side.

Boly got away with one on that day, but justice wasn’t too far behind the centre-back – he was sent off just 19 minutes into the reverse fixture later in the campaign.