​We’re all familiar with some classic encounters between these two. Every time the fixture comes around you’ll see a list crop up with some juicy moments, best goals and what have you.

It’s the events hidden under the surface which deserve a mention, though, as some of the more intriguing and memorable happenings in clashes between Arsenal and Tottenham are sometimes lost beneath five-minute montages of goals and drama.

What about the little side-notes buried underneath that have been forgotten about? Y’know, those feisty moments, cheeky gestures, forgotten players and missing boots.

Yeah, those. Let’s have a look at seven of those moments. ​That madcap 5-4 thriller at White Hart Lane in 2004 features regularly on the aforementioned lists. What’s overlooked, however, is that 34-year-old centre back Naybet scored his one and only goal for ​Spurs in the 37th minute.

The Moroccan didn’t really do a whole lot else during his time with the club, eventually retiring in 2006, but as is so often the case at clubs with big rivalries, score in one of them and you won’t be soon forgotten. 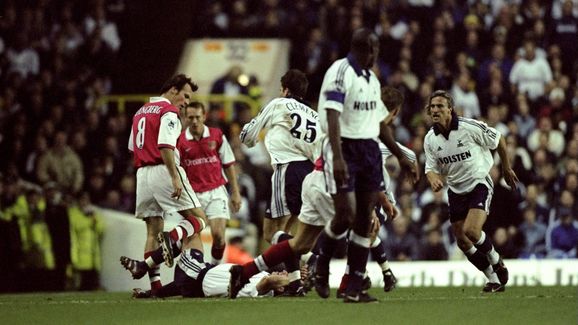 While often a feisty tussle, no North London Derby quite lives up to the November 1999 clash between the two at White Hart Lane.

Spurs had raced into a two-goal lead after 20 minutes, with an ​Arsenal onslaught taking place from thereon in. As the clock was ticking down, frustration crept into the Gunners players, and in the end, nine yellows cards were issued alongside two reds – both going to Arsenal men.

It was Ljungberg’s which caught the eye, though, after he was sent off for a scrap with Justin Edinburgh. Upon receiving his marching orders, the Swede (not so eloquently) stuck up two fingers towards referee David Elleray, before booting down a dressing room door on his way out. Martin Keown compounded Arsenal’s misery with his own sending off shortly after.

Arsenal’s 2003/04 ‘Invincibles’ season is synonymous with the ​Premier League. They’re the only side to go the season unbeaten, and precisely where they won the title makes it all the more memorable.

Not if you’re Mauricio Taricco, though. Heading into their White Hart Lane clash knowing a draw would secure them the league crown at the home of their bitter rivals, leading 2-0 in the first half meant that looked on course to happen for the Gunners.

A late Tottenham fightback risked crashing that party, and after winning an injury-time penalty, it seemed, at least for Spurs fans, that they could take some gloss off the Gunners’ achievements by holding them to a draw. Unfortunately, Taricco was seemingly unaware, celebrating so wildly in front of Thierry Henry that he got cramp in the process. It took the Frenchman to tell him after that a draw was enough for his side. Not a great look.

Alan Brazil Scoring in a Rout

You know him, right? The large Glaswegian bloke who does talkSPORT but is now more often found sinking pints with his drinking buddy Ray Parlour? Whether you knew he actually played football or not, or if you knew he was a forward and not a no-nonsense central defender, he actually has history in his particular derby.

Back in 1983, Spurs ran riot against their sworn enemies, thumping the Gunners 5-0. Chris Hughton bagged a couple, as did Arsenal’s first victims on their way to the 2014 FA Cup were Spurs.