As another football-less week monotonously drags on and now that the novelty of doing keepy-uppies with a battered toilet roll has worn off, why not rewind the clock to a time when Belarus wasn’t the epicentre of the live sport.

Given how the season has gone so far, looking back at the golden years may have been a more preferable option for Arsenal fans even in the absence of this hiatus.

With the Premier League table frozen, Arsenal are not only one agonising position below Tottenham, they’re also as many points off the bottom three as they’re behind the top trio.

So, let’s head back to the days of Highbury and when the manager had more than ten league games of coaching experience, to look back on some classic clashes any Arsenal could do with remembering…

“Arsenal come streaming forward now in surely what will be their last attack. Thomas, charging through the midfield… Thomas… it’s up for grabs now… THOMAS! Right at the end!”

​Arsenal need not only to win against a Liverpool side who had won 13 trophies in the previous eight years, but win by two goals.

Alan Smith teed up an incredible climax with a goal seven minutes into the second half, which was awarded after a discussion between the referee and his assistant – who had bizarrely never worked together before, or since.

As the clock ticked down, fans at home didn’t know how long was left, so TV producers took the hitherto unheard of step of putting a running clock of the screen to put a timer on the agony of nail-biting supporters.

Then the ball fell to Michael Thomas’ feet and after feinting to shoot, he stabbed over the diving Bruce Grobbelaar to seal the most dramatic game in the history of English football. Well, until that one.

Arsenal had Slaven Bilić to thank for easing them into this game, the Croatian defender inadvertently heading the ball past his own goalkeeper in the sixth minute.

Despite trailing United for the majority of the season and even lagging 13 points behind the leaders on Boxing Day, Arsenal claimed the title with a 4-0 victory crowned by Tony Adams’ rampaging charge through the centre. The lumbering captain latched onto his fellow centre-back’s delicate chip to volley – left-footed – past ​Everton’s keeper.

The resulting celebration of Adams with arms outstretched was so iconic that it’s the pose he’s in for his bronze statue outside the Emirates. 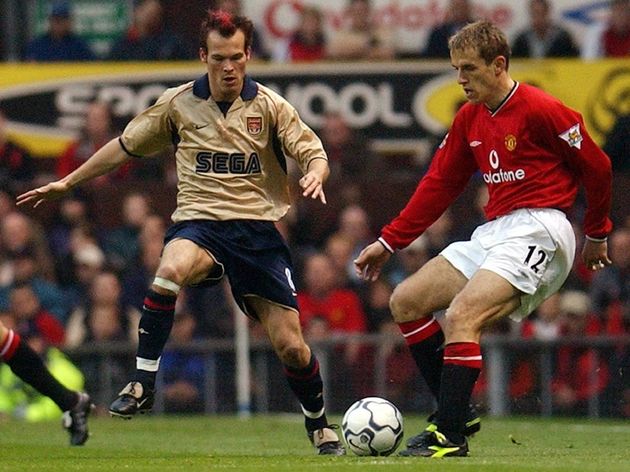 Four days after winning the FA Cup, Arsenal travelled to Old Trafford again knowing a win would seal the Double and snatch the trophy from Alex Ferguson’s grasp after a hat-trick of ​Premier Leagues.

This victory came in a sequence of 13 consecutive Premier League wins to end the season and Sylvain Wiltord’s goal not only ensured the Gunners netted in every game they played that campaign, but also sealed their unbeaten record away from home in 2001/02.

After Unai Emery’s tumultuous reign, this propensity to avoid defeat on the road had actually started to ​re-emerge under Mikel Arteta prior the suspension of play.

Javier Zanetti did everything right, showed him onto his left foot… But Thierry Henry was unstoppable on nights like this 

Highlights of Arsenal’s famous 5-1 win at the San Siro coming up tonight! However, Santi Cazorla scored a sublime free kick to quickly reduce the deficit as Arsenal regained some composure in the second half, Laurent Koscielny levelling proceedings.

Extra time brought more frayed nerves for Arsenal fans at Wembley but, with just 11 minutes remaining, ​Olivier Giroud produced a delicate back-heel – the Frenchman’s clarity of thought in that moment has been unfairly lost in the fog of time – teeing up Aaron Ramsey to stab in the winner and seal the FA Cup. Aside from a poor display at Anfield on the opening day, Arsenal had started the 2016/17 season in encouraging fashion.

By the time Chelsea arrived at the Emirates in September, the Gunners were sitting third in the table with Mesut Özil, Alexis Sánchez and particularly Theo Walcott in blistering form.