​Go on, try and remember the last time you heard of a football club having five captains.

Now, while Granit Xhaka was named Arsenal’s permanent recipient of the armband, he is one of a group of five selected by Unai Emery in a pool of captains who will shoulder the responsibility moving forward.

Alexandre Lacazette, Pierre-Emerick Aubameyang, Mesut Ozil and Hector Bellerin forge the other members and that got us thinking: what could the quintet get up to in order the strengthen their bond moving forward?

Here are five options to help the ​Gunners troupe move in motion.

Guess Who? With Individual Errors With each of the five members taking it in turns to read out a card with a specific date on, everyone must write down who they believed was culpable for a specific mistake.

Situation: Unknown player recklessly slides in on Son Heung-min to hand the visitors a penalty.

Lacazette: “Don’t look at me.”

Aubameyang: “I was at the other end of the pitch.”

Xhaka: “Yeah, alright, FFS this one was me.”

To be fair, nigh on every game would be won by Xhaka. I mean, who doesn’t love a round of golf? With five nationalities represented in the group of captains it would make for interesting competition between the lads.

Gang Up on Matteo Guendouzi So frail, so lanky, so…harmless.

Like the group of bullies at school, or the older kids picking on the younger ones, the quintet could prank the young Frenchman daily.

All watching on innocently as they see him open his locker to a mountain of stale croissants; they could chuckle away hysterically among themselves, in turn getting closer together as they draw sadistic pleasure from their mischievousness.

Furthermore, they could cut his hair off. I think we’d all like to see what that looks like. Aubameyang and Lacazette already have this nailed down to a tee, but, it’s going to cause a divide within the group if they don’t all have a similar personal connection.

They all have their individual goal celebrations already: Ozil sucks his thumb and dedicates his goals to his niece, Xhaka goes all political, Bellerin looks shocked and then the aforementioned duo do their thing. 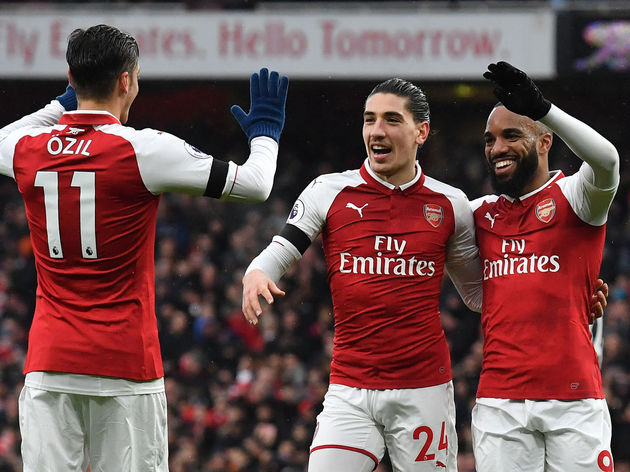 But, hear me out: what if they all lived together? Applying a weekly cleaning rota, along with assigning breakfast duties, all five could bunk up a la university halls and bond every night.

Ozil could teach them all how to play Fortnite. ​Lacazette could inspire them with his facial hair routines, Bellerin doing likewise for their barnets. Xhaka could teach them all about the Balkan conflict and ​Aubameyang could just lighten the mood with his constant laughter. It’d be perfect.