Arsenal continued their perfect start to the Women’s Super League season with a 4-0 victory over West Ham at Meadow Park.

The Gunners dominated the first half, but it took them until the 39th minute to break the deadlock through Kim Little.

Goals were easier to come by for the Gunners in the second half as Little added a second goal – her 50th in the WSL – shortly after the break before Beth Mead and Grace Fisk’s own goal rounded off Arsenal’s victory.

The win sees Jonas Eidevall’s side, who now have six wins from their opening six WSL games, move three points clear of Chelsea at the top of the table. 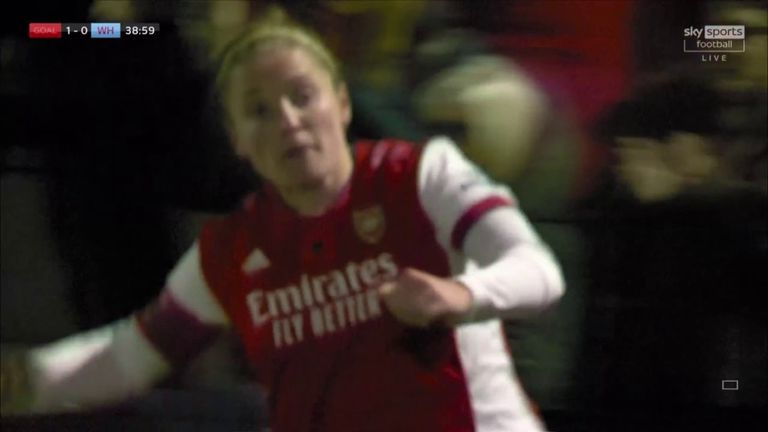 How Arsenal eased past the Hammers…

West Ham started brightly and created the first chance of the game, but Claudia Walker could only steer her shot wide of the upright.

It was a rather uncharacteristic start from the Gunners at the back as Leah Williamson gifted possession to Tameka Yallop, and she tried to chip Manuela Zinsberger, but the Arsenal goalkeeper got back just in time to make the save.

From there Arsenal grew into the game and started to dominate proceedings. Mana Iwabuchi’s strike struck the post before Williamson’s long-range effort drifted just wide of the upright.

The Gunners hit the woodwork for the second time midway through the first half, Nikita Parris touching Mead’s strike onto the upright as West Ham survived once more.

The breakthrough eventually came just before half-time when Little produced a superb change of pace to burst into the penalty area before powering a low shot past Mackenzie Arnold and into the bottom corner. 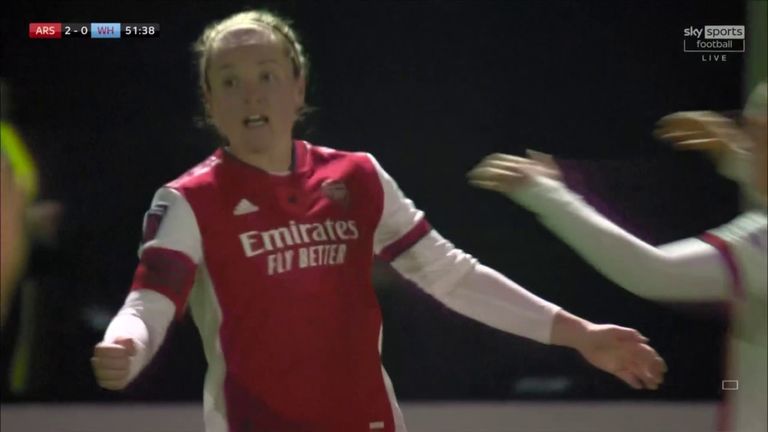 The goal opened the floodgates for the Gunners and Little added a second with another powerful finish after being played in Noelle Maritz.

A third quickly followed as Parris produced a sublime turn on halfway before driving at the heart of the West Ham defence and playing in Mead, who provided the finish. 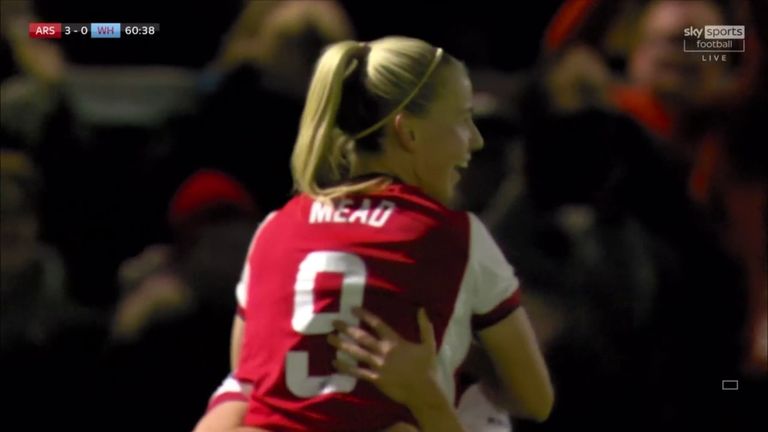 West Ham’s evening was compounded when substitute Fisk turned Mead’s cross into her own net late on.

It put the finishing touch on another good night for the Gunners, who continue to set the pace in the Women’s Super League.

Ria Percival scored a last-gasp free-kick as Tottenham fought back to steal a late point from a 1-1 Barclays Women’s Super League draw at home to Manchester United to move up to third – read the match report here.

Manchester City registered only their second WSL win of the season – and first in five matches – as they came from behind to win 4-1 at rock-bottom Leicester.

Jess Sigsworth put the Foxes 1-0 up in the opening minute of the contest before City hit back with goals from Caroline Weir and Keira Walsh in the first half and then Lauren Hemp and Laura Coombs in the second.

Gareth Taylor’s City are up to seventh with seven points from six games, while Leicester’s search for their first point of the campaign goes on.

Second-bottom Birmingham were beaten 3-0 at home by Reading, with Natasha Dowie opening the scoring and Deanne Rose adding a brace.