It’s been a whirlwind few days for 15-year-old Ethan Nwaneri. But Arsenal’s record-breaking debutant is used to that.

Rewind to February 2020 and the teenager is playing in attack for Arsenal’s Under-14s away at West Ham. Storm Ciara had hit the UK all week and the youth team players on the pitch were put in unchartered territory – but a 12-year-old Nwaneri would not be thrown about.

“He was from the Under 13s, playing in the age group above – even then he was one of the better players in that group,” a Premier League scout who was watching that game tells Sky Sports.

“The conditions were terrible – it was really windy and rainy and it’s normally difficult to assess these players in that environment. But I picked out bits like his body language, his character and the way he reacted to the conditions.

“He scored in that game and has an eye for goal, but he really wanted to be involved in the build-up play and had good ball control.”

Now Nwaneri is the most talked about teenager in English football – after his brief cameo for Arsenal in their 3-0 win over Brentford on Super Sunday made him the youngest ever Premier League player at 15 years and 181 days.

The midfielder spent three minutes on the west London pitch, and didn’t touch the ball, but the experience of senior football was there for a player who was born after the Emirates Stadium was built – and was 12-years-old when the UK went into the first coronavirus lockdown.

Playing in an older age group has been the way of the world for the attacking midfielder so far. Those familiar with his rise up the youth football have seen him playing above his age group since Under-13 level.

“When I saw him, he was different gravy,” the same scout adds. “I first spotted him when I was working at other Premier League clubs when he was playing for Arsenal’s Under-13s as an 11-year-old.

“But it was a few years later – when I was watching him as a Manchester United scout – that he had developed into what we call a Grade A academy player.

“I would have marked him as a signing at United if it was down to me but trying to get a player from Category One academy team to another one is difficult.

“Even when he was around 12 or 13 years old, you could see that he was the pick of the bunch, the best player on the pitch – even for the year group above. Every time he got on the ball, he looked to make things happen. He always posed a threat, took set pieces and put in good deliveries with them.”

The coaches at Arsenal have continued to play him above his age group, but his rise over the past 12 months has been nothing short of dramatic. Last season, he was a regular for Arsenal’s U16s aged 14 but only made his first start for the U18s in February of this year.

The teenager made an immediate impact, scoring two assists in a 4-2 win over Reading U18s as his stock at Arsenal grew even further.

“He’s someone very highly thought of here as there are other boys at Hale End as well,” said Under-18 coach Dan Micciche after that game.

“I trusted him to perform today and he got two assists. Knowing him, he will leave here disappointed that he has not scored a goal or he’s misplaced a few passes because he’s got that champion mentality.”

The phrase “champion mentality” often pops up when an Arsenal youth product comes through the ranks into the first-team. The same term was given to Bukayo Saka by one Arsenal scout when the winger was in the Gunners’ Under-9s team.

And one wonders whether it was that mentality that influenced Mikel Arteta’s “gut feeling”, before the Arsenal first-team manager got Nwaneri involved against Brentford, a few weeks after the player played Under-21 football for the first time.

“The first time I met him, I looked into his eyes and I had that feeling. I really liked what I saw,” said Arteta after he gave Nwaneri his debut. 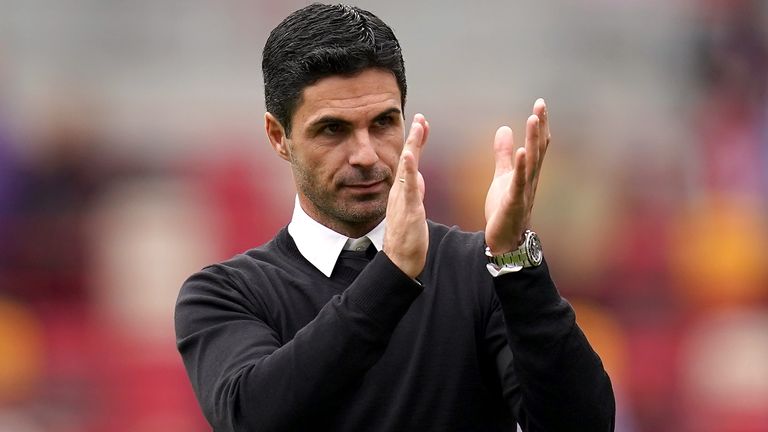 “[Academy manager] Per Mertesacker and the academy staff are giving me really good information, [sporting director] Edu as well.”

The Arsenal first-team are noticing something special too – none more so than midfielder Granit Xhaka, who has coached Nwaneri’s Under-16s team recently as the Gunners vice-captain works towards his coaching badges.

“He looks old when I see him but the club can be proud of a player like him,” said Xhaka after Arsenal’s win at Brentford.

“You can see a big difference with him and the other guys. He is very, very special.

“Of course you have to protect him as he is very young but if he keeps going like this with his hard work he has a big, big future.”

So, what now for Nwaneri? The history books show that the path forward for the Premier League’s youngest ever players are unclear.

The Arsenal teenager has taken over the record from Harvey Elliott, who is now a regular starter at Jurgen Klopp’s Liverpool. Aaron Lennon is now the fourth-youngest player in Premier League history and has spent nearly two decades as a Premier League player.

But then there are the one-hit wonders like Matthew Briggs, Jose Baxter and Izzy Brown – who either retired from the game early or are stuck in non-league without making any Premier League impact. Which category Nwaneri falls into will be determined in the next few years.

There’s international recognition up for grabs too. “He’s definitely on our radar,” England Under-21 manager Lee Carsley tells Sky Sports. “He’s a real talent and it’s a fantastic achievement.

“When they get a chance in the first-team, it’s different. It’s not a sink or swim situation but we’ve seen players who struggle to make that transition from academy football into the seniors. They all need time and that experience so it’s great that Mikel did that.”

Meanwhile, Arteta adds: “It’s just one step and all the steps in your career are not forward and you have to know that. You can go forward then backwards and then forwards. That’s, unfortunately, this industry and the football career of any player.

“All the decisions that we take, that I take, are for the club. It’s not for me, it’s not for the player. It’s because we believe he has a talent that has to be developed incredibly in the next few years and we’ll see how we manage that.”

“I’m sure they have a plan for him,” Arsenal academy product Folarin Balogun, currently on loan at Ligue 1 club Stade de Reims, says to Sky Sports. “There’s been a lot of players in the past who have kicked on early, [such as] Reiss Nelson and Bukayo, who made his debut when he was 17. I’m sure if he keeps his head down, he will see through that plan.” 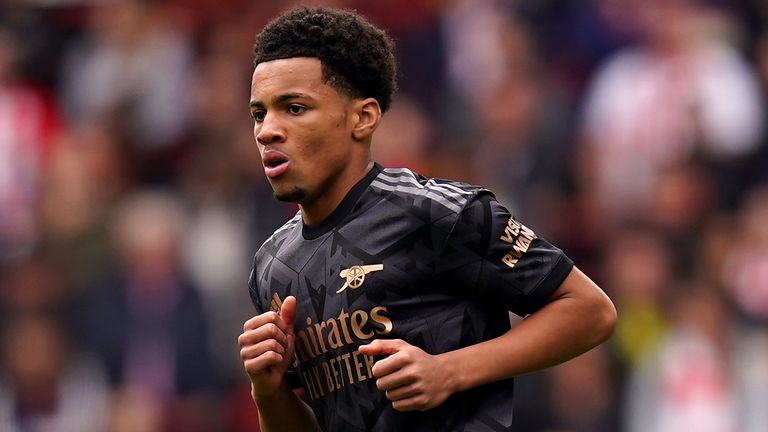 England Under-21 international Folarin Balogun, who is on loan at Reims from Arsenal, was pleased to see Ethan Nwaneri become the youngest Premier League player ever at just 15 for the Gunners.

Given the recent success of Saka and Emile Smith Rowe in coming through the Arsenal ranks, Nwaneri seems to be in the right place at the right time.

‘Arsenal and England have the new Fabregas’

“Ethan is a very humble boy. He’s been on the radar of clubs since he was nine years old so he’s used to the attention.

“But what is best about him is his parents and the way they have brought him up. They’re dedicated to him, they support him in every way possible. They focus on his education because they want him to have a safety net and they’ve kept him humble, which is something he is going to need now he’s been thrust in the public eye.

“They are constantly in the school checking if he’s falling behind. His father said that if Ethan didn’t pass his end of year exams, he wouldn’t let him play for Arsenal.

“His father told me something that has stuck in my mind which is the triangle: Family, the football club and education. If you have those three pillars, you have a humble boy. That’s what Ethan is.

“He is immaculately dressed [at school] – his shirt is crisp white, his tie is perfect, his blazer is perfect. If you look at Ethan’s face when he came on to the pitch [at Brentford]: Calm, collected and that’s what he’s about.

“The first time I saw him was at the school academy trial day and we had a football pitch that was full of academy players from football clubs.

“You’re looking for that talent that might just about stand out, but when Ethan went out on the pitch, he was so head and shoulders above the other children, he was just passing them as if he wasn’t there – which is incredible as we’re talking about a football pitch full of academy players.

“We had to take him off the pitch because no other player could touch the ball and he got his full scholarship within eight minutes. That’s how talented he is.

“I then texted someone with a lot of knowledge about football and said ‘Do you know someone called Ethan Nwaneri?’ and his simple text to me was: ‘yes, he’s spectacular’.