In a press conference a few weeks into his Arsenal tenure, Mikel Arteta was asked about filling holes in his side by using players in unfamiliar roles. It was, he said, an approach born out of necessity.

“With more time,” Arteta added. “I would like to have a specialist for every position to do exactly what we want to do.”

Arteta was speaking ahead of a game against Burnley which Arsenal were fortunate to draw. But a year and a half on, he has got his wish.

Arsenal returned to Turf Moor on Saturday with a team almost unrecognisable from the one they fielded at the same ground in February 2020 – and this time they secured a battling 1-0 win.

The overhaul has been comprehensive.

Even Bukayo Saka and Pierre-Emerick Aubameyang, the only players remaining from the previous line-up in Saturday’s game, were this time able to play in their favoured positions rather than at left-back and on the left wing respectively.

Their chaotic start to the season has left Arsenal with ground to make up. But with a new-look squad in place and a full complement of players for Arteta to choose from, Sunday’s north London derby against Tottenham is an opportunity to show the tools are now in place for a brighter future.

The transformation is perhaps most apparent in defence.

Gone are David Luiz, Shkodran Mustafi and Hector Bellerin, replaced by Gabriel Magalhaes, Ben White and Takehiro Tomiyasu. Together with Kieran Tierney, who has put an injury-hit start to his Arsenal career behind him, they comprise a new-look backline.

The quartet have made an encouraging start, helping Arsenal keep clean sheets against Norwich and Burnley, and it is already apparent that they have been recruited with “specialist” qualities in mind.

In Gabriel’s case, that means physicality. The 6ft 3ins Brazilian was arguably the player Arsenal missed most at the start of the season, with Pablo Mari struggling in his place, and on Saturday he dealt with Chris Wood and Ashley Barnes impressively.

He did not do it alone, of course. Arteta described his centre-back partner White as an “exceptional defender” in conversation with Sky Sports last month and at 6ft 2ins, he has a physical presence too.

In fact, while White was criticised for his performance against Brentford’s Ivan Toney on the opening day of the season, it should be noted he won the same number of duels as Gabriel at Turf Moor.

His biggest strengths, though, undoubtedly lie in possession.

White is an excellent passer who excels at carrying the ball out of defence and breaking opposition lines. “With the ball, he’s got special qualities that I needed for the way we play,” added Arteta.

White’s technical ability is such that he has been used in midfield by his previous clubs and in Arsenal’s recent win over Norwich, he even created three chances – the most by an Arsenal centre-back in a Premier League game since Opta started collecting the data.

The early evidence suggests White and Gabriel can complement each other nicely and the same can be said of Arsenal’s full-backs, who fulfil very different roles on either side of the pitch.

Tomiyasu is another tall, physical defender whose combative style has swiftly won over supporters following his arrival from Bologna.

The 23-year-old is tough in the tackle and strong in the air. In the last two rounds of Premier League fixtures, only Everton’s Yerry Mina, who stands at 6ft 5ins, has won more aerial duels.

Tomiyasu is also versatile – the Japanese international is able to play anywhere across the backline – and his defensive attributes make him an ideal candidate to provide the balance needed to offset Tierney’s advanced positioning on the opposite flank.

Indeed, Tierney is one of Arsenal’s most productive attacking outlets and that’s been particularly evident this season. He has created more chances from open play than any other Arsenal player so far. Nobody has sent more passes into the opposition box.

With the Scot charging forward on the left, Arteta needs a defensively-minded right-back to ensure Arsenal are not caught out at the other end. Expect Tomiyasu, White, Gabriel and Tierney to start again when Spurs visit the Emirates Stadium on Sunday.

In addition to the specialist defenders he has long craved, Arteta now has a specialist goalkeeper too.

He did not hesitate to throw Aaron Ramsdale into the team following his £30m arrival from Sheffield United and his status as first-choice was further emphasised when he was rested for the Carabao Cup win over AFC Wimbledon on Wednesday night.

Ramsdale was not too sternly tested on his Premier League debut against Norwich but it was a different story at Turf Moor and he responded with a man-of-the-match performance.

Arsenal were subjected to an aerial bombardment in that game – Burnley’s total of 41 crosses was the most the Gunners have faced in the Premier League since a meeting with Crystal Palace in 2015 – but Ramsdale was instrumental in keeping them out.

The way he commanded his penalty box contrasted sharply with how Bernd Leno allowed Brentford to overpower him on the opening day of the season. In total, Ramsdale claimed four high balls – the joint-most by any goalkeeper in a Premier League game this season.

Ramsdale also reacted smartly to thwart Matej Vydra after White had underhit a backpass, a VAR review finding he won the ball cleanly before overturning the referee’s decision to award a penalty, and his performance also featured intelligent distribution.

Indeed, it is with the ball at his feet that Ramsdale is most obviously a better fit for Arteta’s way of playing than Leno.

The 29-year-old has been a fine servant to Arsenal since his arrival from Bayer Leverkusen in 2018 but he has never looked comfortable with Arteta’s emphasis on playing out from the back.

His poor decision-making in possession has frequently landed Arsenal team-mates in trouble in their own defensive third but Ramsdale looks far more confident and assertive on the ball – whether it be over short or long distances.

There have been some eye-catching passes already.

On his debut against West Brom in the Carabao Cup, there was a threaded through-ball to find Martin Odegaard in space near the halfway line. At Turf Moor on Saturday, there was a drilled, diagonal pass over the top of Burnley’s defence to release Pierre-Emerick Aubameyang on the counter-attack.

Arteta needed a goalkeeper who could handle both sides of the game. The early evidence suggests he has found one in Ramsdale.

Thomas Partey’s first north London derby appearance, at the Tottenham Hotspur Stadium in December of last year, does not hold happy memories for him.

The Ghanaian, who had been rushed back from a thigh injury to start the game, controversially walked off the pitch having aggravated the issue in the build-up to Tottenham’s second goal.

Arsenal went on to lose 2-0 that day and Partey did not reappear for six weeks. By the end of his first campaign in England, his injury problems had limited him to only 18 Premier League starts.

There was more frustration at the start of the new campaign as he sustained an ankle injury during a pre-season meeting with Chelsea. But Partey is back now, just in time to face Spurs again, and that’s good news for the manager who pushed for his signing.

“He is a player that has to be one of the leaders, he has to be the boss in midfield,” said the Spaniard earlier this month. “We have been missing that big time.”

Arteta holds Granit Xhaka in similar esteem in terms of his leadership but the Swiss international’s recent suspension has perhaps worked to his advantage as it has allowed him to trial something closer to the 4-3-3 formation he has long planned for.

In it, Partey is Arteta’s “anchor”. “He’s the one who reads what is happening and makes the rest better,” he added recently. “How he manages the transition, the pressing. He has charisma.”

It is a big job, screening Arsenal’s defence almost single-handedly behind two more offensively-minded central midfielders, but Partey has the athleticism and awareness for the defensive aspects of the role and he is also there for his distribution.

Against Burnley last weekend, and indeed against AFC Wimbledon on Wednesday night, the 28-year-old could be seen dropping between Arsenal’s centre-backs to collect the ball from the goalkeeper and initiate attacks.

Arsenal’s central midfield was an area of flux last season but Arteta’s side is stronger when it contains a fully fit Partey. Perhaps he will look back on Sunday’s meeting with Spurs with fonder memories. 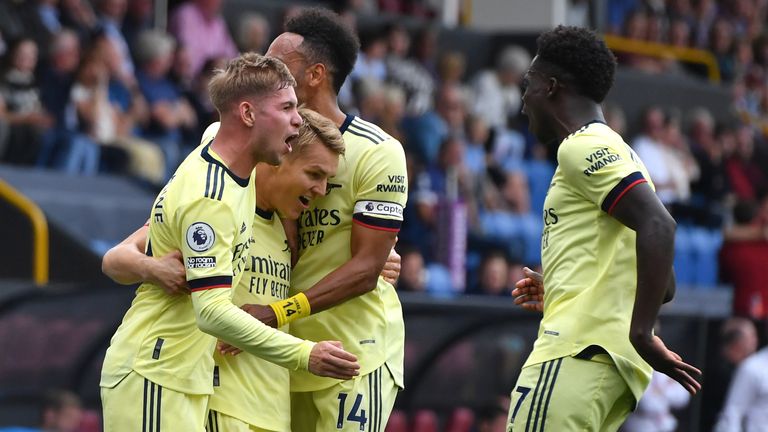 Should Arsenal be confident of beating Tottenham on Sunday?

One of Arsenal’s biggest issues under Arteta has been a lack of fluency and creativity in attack. The Gunners were the Premier League’s third-best team in terms of goals conceded last season but at the other end of the pitch they were far less impressive.

Arsenal scored just 55 goals, their lowest total since the 1995/96 campaign, and ranked 11th among Premier League sides for shots, 12th for big chances created and 10th in terms of expected goals.

The key to improving those numbers lies with Martin Odegaard. The Norwegian’s impact was not exactly transformative during his loan spell from Real Madrid last season, his form dipping after he suffered an ankle injury, but his stunning free-kick against Burnley on Saturday was a reminder of his considerable quality.

Arteta lobbied for his permanent signing knowing he possesses precisely the qualities he wants from an attacking midfielder.

Unlike the departed Mesut Ozil, Odegaard is a tireless worker who presses opponents diligently and intelligently, helping to disrupt opposition passing moves and win possession high up the pitch.

After that, he is responsible for providing a bridge between midfield and attack and while he has not yet unlocked Arsenal in an offensive sense – he has only created four chances in three appearances so far this season – he is certainly popping up in the right areas.

Arsenal have lacked a presence in the No 10 position for much of Arteta’s tenure, instead becoming overly reliant on attacking down the flanks, but Odegaard is having a healthy number of touches in central zones this season.

It bodes well for Arsenal’s attacking prospects and the hope is that he will soon start to combine more effectively with Pierre-Emerick Aubameyang, who is now being deployed centrally rather than on the left.

The 31-year-old endured a difficult campaign last year but with four goals in five appearances in all competitions this season – albeit including a hat-trick against West Brom in the Carabao Cup – there have been tentative signs of a return to form.

The same applies to Arsenal more broadly. Arteta wanted specialists in every position and now he has them. Sunday’s meeting with Spurs is a stern test of his new-look side but it’s one they must overcome if they are to maintain their recent progress.

Peter Smith is joined by Sky Sports pundit Alan Smith, as well as football writers Ben Grounds and Adam Bate, to look ahead to the Premier League weekend’s standout fixtures…

PART 1 | Will a north London derby win be a launchpad for Arsenal or Tottenham? Former Gunner Alan Smith gives his verdict on the two teams and where the match will be won or lost on Sunday.

PART 2 | We preview Man City’s trip to Chelsea on Saturday, where two title favourites collide, and reflect on the start made by another Premier League challenger in Liverpool, ahead of their game with Brentford.

PART 3 | After an encouraging draw at Man City, will Southampton get off the mark against a goal-shy Wolves this weekend? And we look at what Crystal Palace boss Patrick Vieira has to do to land a breakthrough win over Brighton on MNF.