Manuel Pellegrini’s men will be crowned champions should they avoid defeat against West Ham, while Manchester United could still sneak a Europa League spot ahead of Tottenham

At 21.39BST on April 16 it did not seem possible. Manchester City had just been held to a 2-2 draw by then-bottom club Sunderland and it looked for all the world like Liverpool were going to march on and collect their first Premier League title in 24 years.

Samir Nasri’s strike two minutes from time rescued a point against the Black Cats after two goals from Connor Wickham but, with the Merseysiders in imperious form, there only appeared one outcome: Liverpool being crowned champions.

How things can change. A quite remarkable collapse from Brendan Rodgers’s side, in which they picked up just one point from two games against Chelsea and Crystal Palace, saw the title dramatically slip from their grasp.

City, meanwhile, held their nerve to record four wins on the spin and know that just a point in their final game of the season against West Ham would, should Liverpool fail to put 13 goals past Newcastle, see them claim their second title in three seasons. 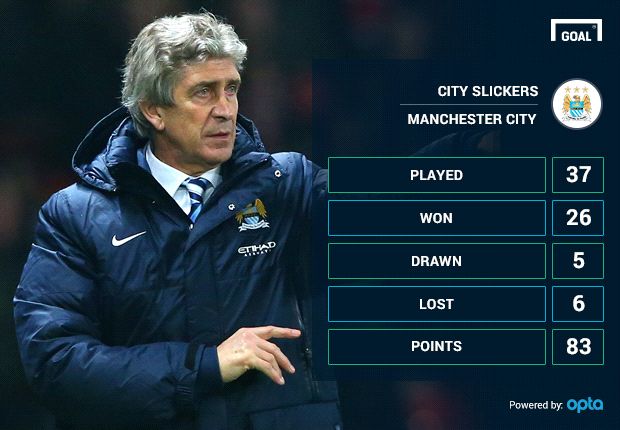 With the Champions League places decided after Everton’s defeat to Manuel Pellegrini’s men – which ensured that Arsenal will finish fourth – attention turns to the Europa League spots and the battle to finish sixth.

Manchester United’s dismal campaign comes to an end at Southampton on Sunday in what is set to be Ryan Giggs’s final game in charge before Louis van Gaal takes control after his World Cup commitments with Netherlands.

The Red Devils could sneak into Europe’s secondary competition should Tottenham, who currently have a three-point cushion over United but a far inferior goal difference, suffer defeat to Aston Villa and Giggs leads his side to victory at St Mary’s Stadium.

Elsewhere in the table, Crystal Palace and Sunderland could cap what has been an extraordinary end to the season for both sides by finishing 10th and 12th, respectively.

Tony Pulis, who has been nothing short of a revelation since replacing Ian Holloway at Selhurst Park back in November, has lifted the Eagles from the bottom three to 11th and could still finish above former side Stoke City in the table.

Sunderland, meanwhile, have pulled off something of a great escape, with the Black Cats capable of finishing as high as 12th in the table, having been rock bottom just two weeks previously, should they come out on top against Swansea City on Sunday and West Ham fall to defeat at Manchester City.

As for the fight to avoid the drop, both Cardiff City and Fulham have already had their fate confirmed and Norwich City are set to join them in the Championship.

The Canaries, who secured what normally would have been a commendable point against Chelsea at Stamford Bridge last time out, will drop down a division unless they defeat Arsenal and West Brom lose to Stoke, overturning a 17-goal deficit in the process.