Ainsley Maitland-Niles has made a plea on social media for a move to gain first-team football, but Arsenal have insisted the midfielder stay and fight for his place.

The 23-year-old is keen to leave the Emirates and secure more minutes, particularly ahead of the 2022 World Cup.

However, Arsenal, who were initially prepared to let the utility player leave, now appear to be unwilling to sanction a move so close to the deadline and want the player to fight for his place.

Writing on Instagram, Maitland-Niles said: “All I wanna do is go where I’m wanted and where I’m gonna play.”

He spent the second half of last season on loan at West Brom, but was unable to help keep the club in the Premier League.

Another temporary move was on the cards and, as Sky Sports News exclusively revealed last week, Maitland-Niles was attracting interest from Everton.

The Goodison Park club submitted a loan offer with an option to purchase the player permanently, but Arsenal have had second thoughts about letting him leave this summer.

Arsenal remain in the market for a right-back – a position Maitland-Niles can play – before the window closes on August 31.

They were keen on signing Barcelona right-back Emerson Royal, but the Brazilian prefers a move to Arsenal’s north London rivals Tottenham, who have submitted a €30m (£25.7m) bid. 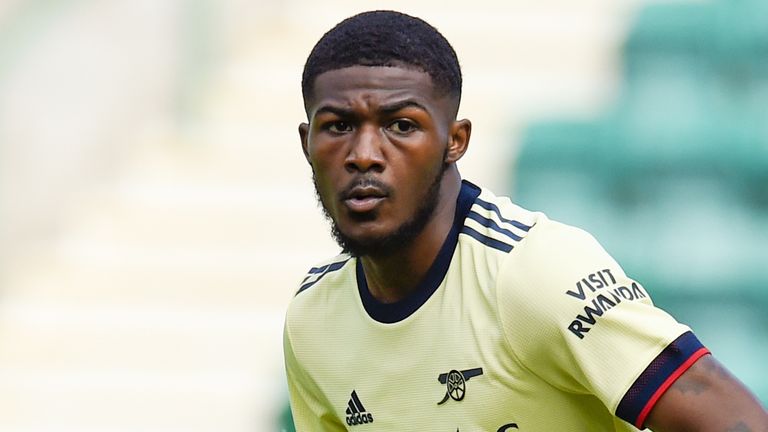 Dharmesh Sheth says it is increasingly likely that Ainsley Maitland-Niles will not be leaving Arsenal during this transfer window – despite the player stating his frustration at a lack of playing time.

“You can see there is a difference of opinion here. Maitland-Niles does want to leave because he feels he isn’t getting the opportunities he deserves at Arsenal.

“Arteta has chosen the likes of Cedric and Chambers ahead of him at right-back. Maitland-Niles’ preference has always been to play in a midfield role and Arsenal already have quite a packed midfield, so he hasn’t got a look-in there.

“As it stands, it looks like Maitland-Niles is staying at Arsenal, but it was a late one when he went to West Brom in the last window. Who knows, there could yet be a Deadline Day twist.”

Patrick Vieira is keen to strengthen his squad further following the recent signing of midfielder Will Hughes from Watford, and has targeted a new forward.

Talks are continuing over a fee, but a gap remains between the two clubs’ respective valuations.

A German club are also in the mix for Nketiah, who has entered the final year of his contract at the Emirates.

Talks over a new deal at Arsenal earlier in the window failed to find a resolution.

Feyenoord are in talks with Arsenal over the loan signing of Reiss Nelson, with the Dutch club increasingly confident of completing a deal for the forward.

Feyenoord have switched their attention to Nelson after they pulled out of a deal to sign Manchester United’s Amad Diallo, who has been ruled out for six weeks with a thigh injury.

Nelson, who is an Arsenal academy product and enjoyed a loan spell at Hoffenheim in the 2018/19 season, has just a year remaining on his contract.

But the Gunners will extend his deal until the summer of 2023 ahead of a loan move to Feyenoord.

The 21-year-old came on as a substitute in Arsenal’s opening-day defeat at Brentford and has played 48 times for the club since making his debut in August 2017.