When Julian Draxler put pen to paper on a new contract last summer, tying him to Schalke until the summer of 2018, it was nothing short of a masterstroke from the Gelsenkirchen club.

Then 19, the young attacker had filled the playmaking void left by the departure of Lewis Holtby and led his side’s unlikely late push for Champions League qualification, while signalling his intention to spend the best years of his career at the Veltins Arena.

Truth be told, Draxler has always seemed destined for bigger and better things. With an excellent turn of pace, two great feet, a strong physical frame, fantastic close control and ability to finish which belies his tender years, it was obvious that he had the potential to become one of the greatest players the club have ever had.

Eight months on, though, and Draxler’s new contract at the club looks to be at risk. After turning down big-money offers from the Premier League last summer, an early-season injury to Klaas-Jan Huntelaar has seen greater emphasis fall on the youngster’s shoulders.

And he has suffered from the weight of expectation. A series of niggles have impacted on his form and the 20-year-old has only contributed one Bundesliga goal. His injury worries came to a head in December and he is still yet to complete a full training session with team-mates this January.

Draxler can ill afford to continue his bad form. Attacking midfield places in Germany’s World Cup squad will be at a premium, with the likes of Mario Gotze, Marco Reus, Toni Kroos, Mesut Ozil, Lukas Podolski, Andre Schurrle, Thomas Muller and Draxler himself all competing for three places.

So, it would be of no surprise if he were to start thinking about moving away from his boyhood club to start afresh elsewhere. Schalke’s bold claims to be on the rise are being hampered by their insistence on retaining Jens Keller as coach, despite his apparent inability to correct his team’s obvious problems.

Arsenal’s expedited need and concrete interest in the German offers him the chance to cut and run and it could be the best option. At Arsenal, he would be able to work with the likes of Ozil, Podolski and Santi Cazorla, all experienced internationals who would be able to teach him his trade and alleviate the pressure on him in big matches. 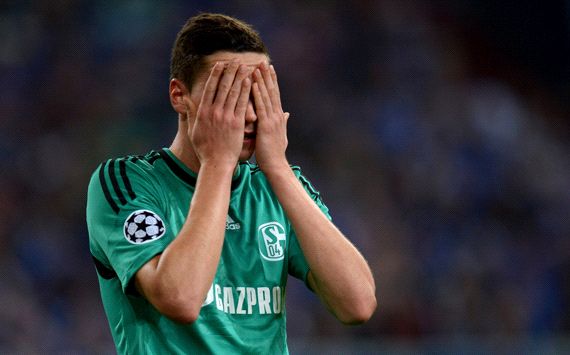 The opportunity to work with Arsene Wenger should also fascinate him. Due to his fluent German, Wenger was able to lure Ozil and Podolski to the Emirates in sucessive summers and his knack for turning attacking midfielders into forwards – as he did with Thierry Henry and Robin van Persie – could pay dividends for Draxler, with Germany in dire need of a new centre-forward for the World Cup and beyond, and Miroslav Klose likely to leave the international arena after Brazil.

It is a role Draxler has all the tools to fill. He is excellent in the box and has the incisive running needed to lead the line. Ozil, his fellow Schalke alumnus, would be able to make the most of his pace and, unlike many of his fellow German schemers, he is deceptively tall and strong.

But the benefits of a move to Arsenal do not end there. The Gunners are fighting for the Premier League title, while Schalke are locked in a struggle for fourth place in the Bundesliga with Wolfsburg and Borussia Monchengladbach, who are both showing far more consistency than the Konigsblauen.

From a personal perspective, he could pick up a healthier wage at Arsenal and increase his global profile. He has already hinted that he could be tempted by the Emirates and that may prove the biggest factor of all. “I sometimes speak to Mesut or Per about the team, about the club, and they always have good words and they tell me nice things,” he said in November. “Arsenal is a very, very nice team. They always have very young players, they play attractive football and that’s what I like.”

That he would be cup-tied for the Champions League is a headache for any potential deal, but with Schalke and Arsenal set to face Real Madrid and Bayern Munich respectively, it’s unlikely that either would have more than two more games in the competition.

As it stands, S04 hold the aces, of course. There is a buyout clause in Draxler’s contract worth just over €45 million, but it does not become active until the summer. He resisted the urge to leave Schalke in 2013, but would be unwise to stay put beyond the World Cup.

Schalke will survive without him. Their academy is capable of churning out talented players at a rate perhaps unmatched in Germany and Max Meyer has already shown what a talent he is so far this term, while Donis Avdijaj looks to have all the ingredients to become a top player at the tender age of 17, given his performances for the club’s Under-19 ranks.

But as for Draxler, the time has come for potentially the most complete attacking midfielder in Europe to make the next step up.