Jose Mourinho said after Sunday’s defeat by Manchester United that facts can’t be debated. The Premier League table doesn’t lie, either: Spurs are six points off the top four with seven games remaining.

It will take a big swing to bring Champions League football back to Spurs next season, a minimum expectation of Mourinho’s at the start of this campaign.

With Harry Kane’s future heavily debated since Saturday morning – he is expected to tell Tottenham he wants to leave if they fail to qualify for the Champions League next season – Spurs have eight cup finals between now and the end of the campaign. This may well be the sliding doors moment for the decade to come.

Missing out on the Champions League has its footballing and financial cost, but they can go again next year. Lose Kane with it, and they don’t just lose a player. They lose their talisman, arguably their greatest player in generations, and they make another side immeasurably stronger.

And in this era where Spurs and Daniel Levy were meant to match this sparkling, world-class new stadium with regular silverware, while developing and signing world-class talent, they’ll have failed to keep their very own. It’s easy to see where things begin to go downhill from there.

Many say football has lost its importance and context this season without fans, but starting at Goodison Park on Friday night, this is arguably Spurs biggest period of this century.
Gerard Brand

Twenty-eight points won now from losing positions. Manchester United’s ability to conjure points after poor starts has been a feature of their season and rarely has it been as emphatic as here. Tottenham scored first but United showcased their attacking prowess in the second half.

If Fred’s role in scoring the equaliser was a surprise, the identity of the man who netted what proved to be the winning goal was more predictable. Edinson Cavani’s movement, latching onto a through-ball from the impressive Paul Pogba, might well have earned him a goal earlier. In the end, it did.

Cavani has shown what is possible for this team when there is a world-class striker waiting in the box. As Gary Neville pointed out on co-commentary for Sky Sports, the prospect of replacing him will be expensive but when it makes the difference as it did here, the need for such a player is clear.

His disallowed goal in the first half was a setback but perhaps not as much as it might have seemed. Ole Gunnar Solskjaer acknowledged afterwards that the incident had sparked United, but it remains a mystery why it requires any catalyst other than the referee’s whistle at kick-off to ignite this team.

What is known is that they have quality within the squad, underlined by Mason Greenwood’s powerful finish for the third goal late on. That is four Premier League wins out of four now, the only team in the competition in that kind of form, and it has seen them pull clear in second place.

That represents steady improvement. Third in his first full season, second in the next, Solskjaer is making some progress and with one foot in the Europa League semi-final, the hope will be that United will have a trophy to take into the summer too. Work still to do, but encouraging signs.
Adam Bate

Granted, this was a Sheffield United side staring relegation full in the face, but there was a notable absentee for Arsenal as they kept alive their hopes of playing in European competition next season.

Sunday’s 3-0 triumph at Bramall Lane was carried out with minimal fuss and without Pierre-Emerick Aubameyang, who was absent due to illness.

Mikel Arteta revealed afterwards that the Gabon striker has been unable to train for the past couple of days but is hopeful of him being back available for the Europa League quarter-final second leg against Slavia Prague on Thursday.

The question, however, is whether Aubameyang will be selected after an impressive display by Alexandre Lacazette and his supporting cast in South Yorkshire. The fresh injury to Bukayo Saka and concerns over Emile Smith Rowe and Martin Odegaard may well force Arteta’s hand, but the Spaniard will be aware of a growing trend.

Arsenal have won 66.6 per cent of their six Premier League games this season without Aubameyang (W4 D1 L1), compared to 36 per cent of those with him in the team (9/25). So will the striker be overlooked during the club’s hour of need this week?

“We had a really strong performance and a clean sheet which was needed after a long time,” Arteta said. “We were efficient and intelligent with the ball. We showed the right attitude so overall I’m really happy. Winning always breeds confidence and we will need that heading into Thursday.”

Arteta will know all the about the role momentum can play in football after seeing Arsenal’s four-game winless run ended, and following a listless display against Liverpool last week, Aubameyang may just be facing a race against time to be named on the bench.
Ben Grounds

The cameo of the season?

Steve Bruce might have not made a more impactful substitution in his career. His decision to bring on Allan Saint-Maximin with his team a goal down and with just 33 minutes remaining can’t be described as inspired as the Frenchman is clearly Newcastle’s best player but timing is everything in football. Bruce unleashed him at just the right time. It looked only a matter of time before Burnley doubled their advantage in what was a one-sided match up until Saint-Maximin entered the fray. 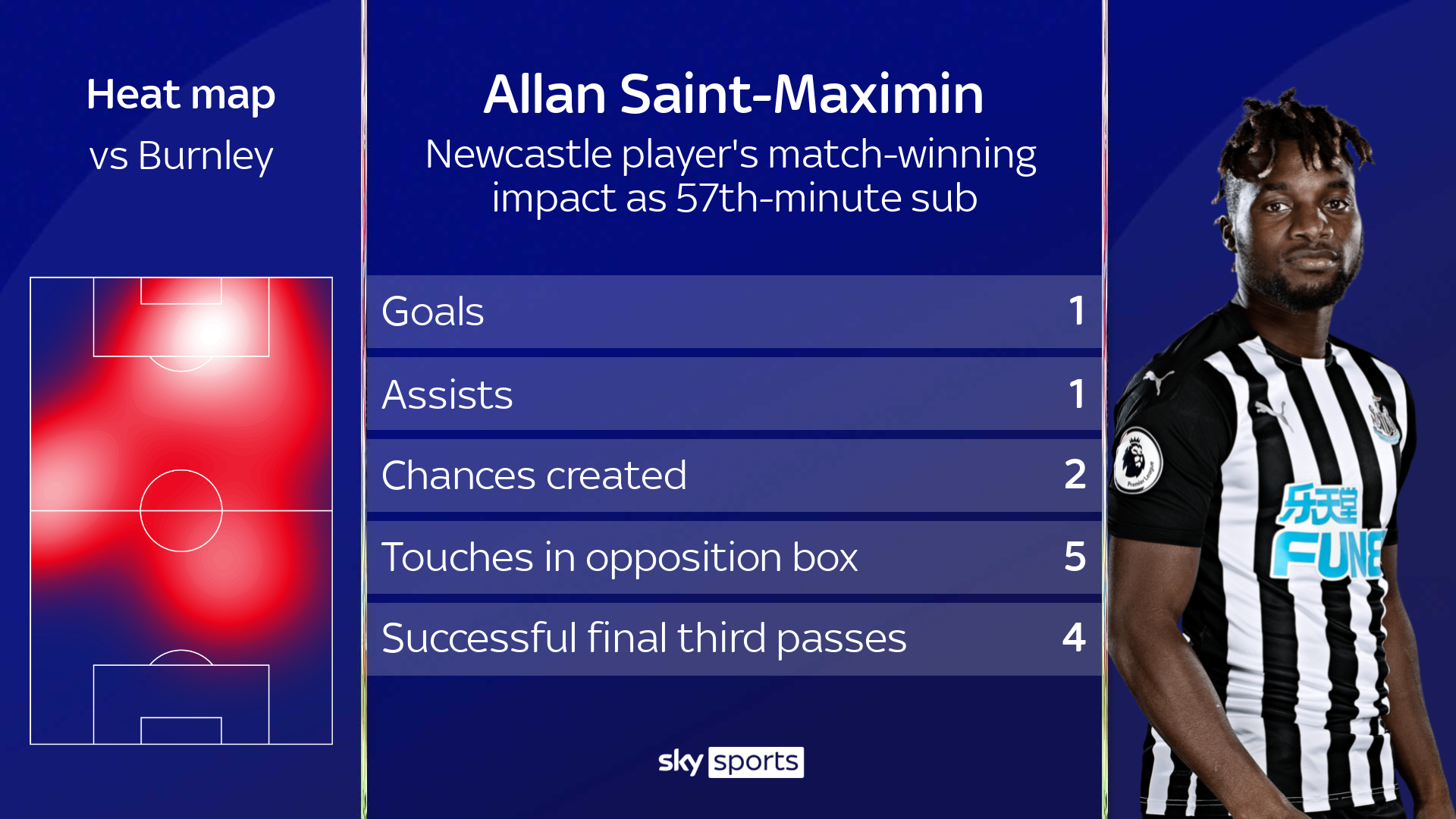 Newcastle should be nowhere near the relegation zone with a player like this on their books.

Saint-Maximin – who before last week’s substitute appearance had been out since February – came on alongside top-scorer Callum Wilson, back after seven games out with a hamstring problem.

Bruce has been very vocal about how much they’ve missed the Frenchman this season and he has a point. In the 13 games Saint-Maximin has missed this season, Newcastle have won just twice. That win percentage rockets to 33 per cent (six wins from 18 matches) in matches that the 24-year-old has featured in. You can be certain if he’d played more than 1014 minutes this season, Bruce’s boys wouldn’t be fighting for survival, they’d be comfortably in mid-table.

Bruce said: “Probably only Allan could have done that, and when you see games like that you see what we have missed. I hope we can keep them both [Callum Wilson] well because we are a different animal with them in the team.”
Lewis Jones

What chance an Old Trafford return for Lingard?

Gary Neville suggested on Monday Night Football after his latest man-of-the-match display that Manchester United may want to take Jesse Lingard back to Old Trafford after the end of his loan at West Ham.

Well, I wonder what the former United captain is thinking now after Lingard turned in another hugely impressive performance to help the Hammers edge out top-four rivals Leicester City in a five-goal thriller on Super Sunday?

He has scored in 4 successive PL apps for the 1st time in his career pic.twitter.com/Ur6idDinYw

Lingard’s first-half double, the first of which to open the scoring at the London Stadium was a piece of brilliance, meant the forward has now scored in four consecutive league games for West Ham.

Not only that, but since making his top-flight debut for West Ham, the England international has been directly involved in more goals than any other player – seven goals and three assists.

And if he carries on in this form, then surely the 28-year-old will not only be in Gareth Southgate’s Euro 2020 squad this summer, but also back in Ole Gunnar Solskjaer’s plans next season?
Richard Morgan