The Turkish giants have been punished after fans tore up seats during their Champions League clash, while Basel and Feyenoord have also been sanctioned

Galatasaray have been fined €50,000 by Uefa following the crowd disturbances during their Champions League defeat to Arsenal.

The Turkish club were beaten 4-1 at Emirates Stadium on October 1 in a fixture that was interrupted by flares being thrown onto the pitch.

Seats in the away section of the ground were also pulled out and broken by Galatasaray fans, with the club having been ordered to contact Arsenal within 30 days in order to settle the cost of the damage.

Arsenal were charged with insufficient organisation as a result of a lack of body searches but will not be punished after Uefa opted to close the disciplinary proceedings against the club. 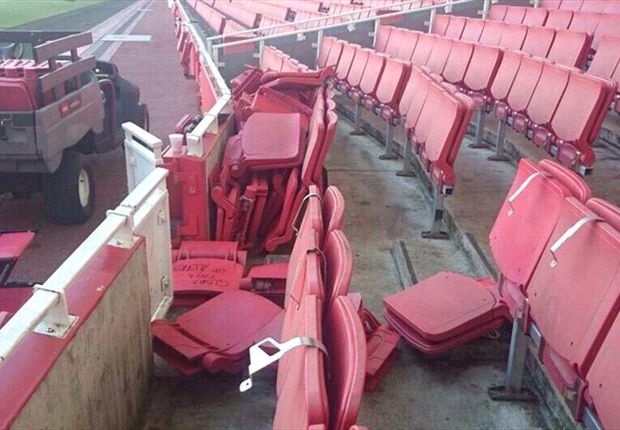 AFTERMATH | Ripped-up seats are removed from the Emirates’ away section
European football’s governing body issued fines to a number of other teams on Monday.

Basel will be required to pay €40,000 as a result of the “throwing of objects” that occurred in their 1-0 victory over Liverpool in the Champions League on October 1.

Feyenoord and Standard Liege, meanwhile, have been fined €15,000 and €17,000 respectively after incidents in their Europa League match the following day.

Both teams have been punished for the setting off of fireworks, while Feyenoord were also found guilty of insufficient organisation and Liege of a crowd disturbance.

The Andorran Football Federation has been ordered to pay €10,000, having been found guilty of insufficient organisation for their match against Wales, whose FA have received a €5,000 fine following a pitch invasion by their supporters.