Goal takes a look at the best players to select or avoid, the bargain buys and the top choice for captain’s double points ahead of this week’s Premier League action

Back from injury and back with a bang, Yaya Toure (9.0) scored and assisted against Crystal Palace last time out to continue his dominant form this season despite a brief lay-off. The Manchester City midfielder has contributed to a goal every 107 minutes this season and a favourable double gameweek means the Ivorian is a must-have.

Like Toure – and most of this week’s suggestions – Juan Mata (10.0) will benefit from two fixtures this gameweek, and Manchester United have particularly appetising home fixtures against Sunderland and Hull City. The Spaniard has five goals in his last four games, plus two assists, and has been lethal against Premier League minnows.

Another player returning from injury is Arsenal playmaker Mesut Ozil (10.0), and the German also made a big impact in his first game back. Looking refreshed and revitalised, he scored and assisted against Newcastle and should relish a home match against struggling West Brom.

Sergio Aguero (10.5) did not quite find his rhythm at Selhurst Park on Sunday and had just three shots before being substituted. But matches against Everton and Hull this week make the Argentine a valuable commodity as the Fantasy Football season races towards its conclusion, and if he can re-find his old form he could be decisive.

Tottenham’s explosive winger Andros Townsend (4.5) will undergo ankle surgery and miss the next 10 weeks, ruling him out of the World Cup and Spurs’ final games of the season. The England international had found his game-time limited under soon-to-be-axed head coach Tim Sherwood though.

Any hope that Ryan Giggs’ caretaker manager duties might prompt a return to form for Marouane Fellaini (8.0) were quickly dispelled when the Belgian failed to even make the 18-man matchday squad against Norwich City. It’s imperative to stock up on United players this week, all bar the afro’d one.

Everton have been solid and reliable at home, conceding just 16 goals all season, but the visit of a rampant Man City side chasing the title could cause big problems for Leighton Baines (7.0) & co. The Toffees conceded twice against Southampton, and three times against Palace, and have looked shaky at the back in the absence of Phil Jagielka and Sylvain Distin.

Jose Mourinho’s preoccupation with the Champions League has seen him sacrifice the club’s Premier League campaign. Wanting to keep his first-teamers wrapped in cotton wool, Gary Cahill (5.5) leads the a host of players likely to be rested against lowly Norwich, with Tomas Kalas impressive enough at Anfield to keep his spot.


Rampaging down the flank from right-back, Phil Jones (5.0) created two chances for his team-mates on top of an assist against Norwich. He stands out as the United defender with the biggest potential gains this week, with home matches against bottom-half teams providing the opportunity for more clean sheets and even goals.

It is not just the Manchester clubs who play twice this gameweek, and West Brom playmaker Morgan Amalfitano (5.0) represents a useful differential. The Frenchman has scored or assisted in four of his last five league outings. Team-mate Ben Foster (4.5), meanwhile, offers a cheap route to potentially two clean sheets.

Differentials will decide Fantasy Football leagues this week, and the underrated Aleksandar Kolarov (5.0) could be a smart alternative to the likes of Pablo Zabaleta, who has been selected by a whopping 26.8 per cent of players compared to just 2.2% for the Serb. No defender in the Premier League has recorded more assists than Kolarov’s six this season.

Sunderland forward Connor Wickham (4.5) is making supporters of the Black Cats believe in miracles. The youngster, who had been on two loan spells this season in the lower divisions, was returned to the fold by manager Gus Poyet and has netted five goals in his last three matches. He’ll be expected to continue that form in a double gameweek.

Matches against Sunderland and Hull City means Wayne Rooney (8.5) is impossible to ignore. The England international was lively in his last outing, scoring twice, and has been in excellent form recently. His double against Norwich was his third brace in his last four appearances, and he has scored or assisted nine goals in his last eight games. The 28-year-old has contributed to a goal every 84 minutes – the best rate of any United player – and has never lost to either the Black Cats or Hull, scoring six times in four games against the latter. 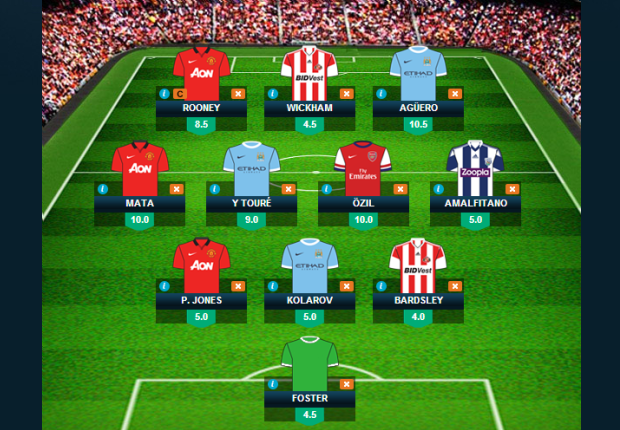 Sign up to Goal’s Premier League Fantasy Football competition for the chance to win monthly prizes. It is simple and fast to register and pick your team, so you can start competing against friends or colleagues for the ultimate bragging rights!