The game might not be as entertaining after a red card but that is no reason to overhaul the laws, while Jose Mourinho is wise to consider an old head

The outcomes of both Manchester City’s Champions League match against Barcelona and Arsenal’s against Bayern Munich were, undeniably, heavily dependent on two penalties and two red cards.

What has followed in the aftermath of both games is the frankly pathetic argument that the red cards either ruined the game or killed the spectacle because of the so-called “triple punishment” whereby the offending team suffers three times for the same foul: a penalty first, a red card second and a suspension third.

The perception exists that the paying public were perhaps cheated out of a better match because of an uneven numbers game. Granted, things probably would have been a lot closer in both matches had City and Arsenal retained the full complement but that is no reason to change the rules.

The International Football Association Board (IFAB) is the body responsible for setting the Laws of the Game. This arcane body is a remnant from ancient times, relatively speaking. It was set up in 1886 by the FA, the Scottish FA, the Football Association of Wales and Northern Ireland’s Irish Football Association in order to standardise the rules of the sport as all four associations adhered to slightly different laws at the time.

Fifa joined with the IFAB in 1913 and now has four representatives on the decision-making committee. A three-quarters majority for any deliberation is required to change laws, meaning Fifa alone cannot alter the Laws, nor can the Home Nations.

The 128th Annual General Meeting of the IFAB is scheduled for Saturday March 1 with the “triple punishment” issue on the Any Other Business part of the agenda at the behest of Uefa.

The “triple punishment” is dealt with under Law 12 in Fifa’s Laws of the Game document under the heading “Denying a goal or an obvious goalscoring opportunity”.

It states: “There are two sending-off offences that deal with denying an opponent an obvious opportunity to score a goal. It is not necessary for the offence to occur inside the penalty area.

“If the referee applies advantage during an obvious goalscoring opportunity and a goal is scored directly, despite the opponent’s handling the ball or fouling an opponent, the player cannot be sent off but he may still be cautioned.

“Referees should consider the following circumstances when deciding whether to send off a player for denying a goal or an obvious goalscoring opportunity:
• the distance between the offence and the goal
• the likelihood of keeping or gaining control of the ball
• the direction of the play
• the location and number of defenders
• the offence which denies an opponent an obvious goalscoring opportunity may be an offence that incurs a direct free kick or an indirect free kick.”

Michel Platini, Uefa’s president, is on the record as stating his preference for Law 12 to be altered in order for clemency to be shown the offending party in a “triple punishment” situation.

“It seems excessive,” he told AS. “The penalty is itself already a punishment enough. I think it’s something that everyone in Fifa and Uefa agree on, but one or two of the countries that make up the International Board are unwilling to change.”

Now that English teams have suffered first hand the “triple punishment” in the Champions League, expect the issue to be put further up the IFAB agenda next time it meets. These matches could not have come at a better time considering how much the issue is now in the public consciousness. The time has never been more ripe for the law to change. And how sad it would be.

It was in fact from an incident in the FA Cup final in 1980 from which the “denying a goal or an obvious goalscoring opportunity” law derived. Arsenal defender Willie Young took down a 17-year-old Paul Allen of West Ham when he was clean through on goal. Allen, despite his winner’s medal, exited Wembley in tears and it was decided something must be done to stop the scourge of the professional foul. Fifa eventually passed the law in 1997.

So it has not even been in place 20 years and now people want it changed on the flimsiest premise. That a team can compete better with 11 than 10 men is obvious but the threat of losing one is part of football. To take it away would be to jeopardise the integrity of the game altogether. Would defenders be more inclined to commit riskier, and potentially more dangerous challenges, close to their own goal, further endangering the safety of their opponent? Would a tiring player commit an offence to take a 15-minute breather in a proposed sin-bin? Do not underestimate a footballer’s ability to circumvent the rules.

The idea that a player should be cosseted by the Laws of the Game because of their own ineptitude is unfathomable. It smacks of desperation and a lack of accountability. If the game suffers as a spectacle, that is the fault of the offending party and not the attacker or the referee. Any alteration to the law is a step backward into a world where thuggery triumphs and incompetence is indulged. 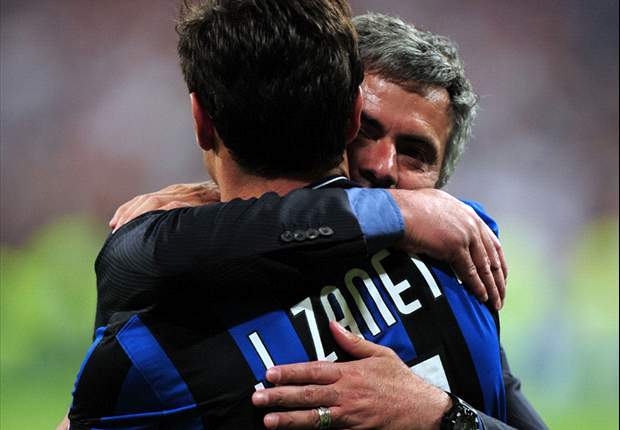 There is little that Javier Zanetti hasn’t seen in his career as a player with Inter and to think of him passing into retirement without imparting some of that acquired knowledge to the next generation would be a shame indeed.

He may have now spent 19 years in blue and black and, in that time, it could be argued that he built up more of a rapport with Jose Mourinho than any other coach at San Siro. He was the Portuguese’s on-field lieutenant for their two seasons together. Zanetti also had a new lease of life under Mourinho and repaid his coach with the Champions League in 2010.

A severe ankle injury last year and a noticeable dip in form this season have hastened once unbearable thoughts of Zanetti’s retirement as a player, with Erik Thohir, the new Inter owner, yet to offer to extend a contract that expires at the end of the season.

Enter Mourinho. The Chelsea boss has begun to sound out the Argentine about taking up a one-season playing role in west London with a view to a coaching position beginning 2015. Although Zanetti is well settled in Milan, this opportunity could be too good to pass up for the player, the manager and the club.

Zanetti may have diminished as a player but he still has few equals at right back or in defensive midfield anywhere in the world. Moreover, with the average age of the Chelsea squad drastically reduced, Mourinho has remarked more than once on their lack of experience. The odd game here and there would still bring out the best in Zanetti. Looking longer term, the 40-year-old would be perfectly placed to act as a mentor and teacher for the new generation of players Mourinho is beginning to bring to the club.

Zanetti is a dedicated professional – one of the all-time greats in that respect – and has dealt with players of all dispositions in the Inter dressing room. Adding a player of his stature would be a winner for Chelsea, a winner for Mourinho and a winner for Zanetti as he contemplates life after his playing days end.