Arsenal moved four points clear at the top of the Premier League and inflicted a first defeat of the season on 10-man Tottenham with a 3-1 win in a pulsating north London derby.

Thomas Partey’s stunning, long-range opener (20) was cancelled out by Harry Kane’s penalty (31) after Gabriel Magalhaes had fouled Richarlison, but the hosts, dominant for much of the first period, took complete control of the game after the break.

Gabriel Jesus capitalised on a mix-up between Hugo Lloris and Cristian Romero to put Arsenal in front from close range (49) and Granit Xhaka struck a clinical third (67) after Emerson Royal had been red carded for a reckless foul on Gabriel Martinelli.

The victory made it seven wins from eight games for Mikel Arteta’s side so far this season, underlining their progress in recent months and giving them a healthy four-point cushion on second-placed Manchester City, who face Manchester United on Sunday.

Man of the match: Granit Xhaka

How Arsenal blew Spurs away

Arsenal came into the game seeking to exact revenge for their costly 3-0 loss at the Tottenham Hotspur Stadium in May and started strongly, with Martinelli seeing an early effort saved by Lloris at his near post.

Spurs were largely pinned back in their own half but provided a warning of their own goal threat when Richarlison’s low shot from a free-kick had to be palmed away by an alert Aaron Ramsdale.

Arsenal’s opener arrived shortly afterwards, however, and it came from an unlikely source in Partey, whose wayward long-range shooting has long been a source of frustration to supporters.

On this occasion, though, with his 65th effort from outside the box since joining the club, he finally found the net, his sensational, first-time effort from Ben White’s lay-off proving unstoppable.

Spurs remained a menace on the break, though, and their penalty came from one such attack as Xhaka’s botched clearance allowed Richarlison to tempt Gabriel into an ill-timed lunge after the Brazilian forward had latched onto a Heung-min Son pass.

Harry Kane stepped up and made no mistake, scoring from the spot for the seventh time in a north London derby, and Spurs went into the break having gained a foothold in the game.

Soon, though, the momentum swung irreversibly in Arsenal’s favour, with Lloris spilling a Bukayo Saka shot shortly after half-time and Cristian Romero failing to deal with the loose ball before Jesus pounced to prod it over the line.

Spurs rarely threatened after that, failing to register a single shot on target in the second half, and their task was made tougher by Emerson’s deserved sending off for his wild lunge at Martinelli.

Xhaka, once again excellent in his new, more attacking midfield role, then made the result safe when he wrong-footed Eric Dier from Martinelli’s flick and powered a low effort beyond Lloris.

Arsenal had chances to turn a comfortable victory into a rout in the closing stages, with Lloris saving superbly from substitute Kieran Tierney, but in the end the three goals proved more than sufficient on an afternoon which sent optimism levels through the roof at the Emirates Stadium.

Granit Xhaka to BT Sport: “We didn’t have a lot of weeks to prepare, but we knew exactly what we wanted, and from the first second, I thought we were the better team.

“My first derby goal in England, I am more than happy, but the most important thing is the team.”

Gabriel Jesus to BT Sport: “I think we deserved to win because we want to play the game, we want to make the passes, we want to create the chances.

Arteta: Jesus takes us to another level

Mikel Arteta to BT Sport: “From the beginning, we went for it. With amazing support, we created a great energy in the stadium and we deserved to win the game.

“We were free, we were courageous, brave and we went for it. This is what we demand the players to do.

“Again, Gabriel Jesus’ winning mentality, the way he trains every day, the confidence he brings to the team, he has taken us to a different level.

“You could feel the connection with the players, the staff and the crowd. I am so happy because it was a beautiful game, a beautiful day, and we’ve made our supporters very happy.” 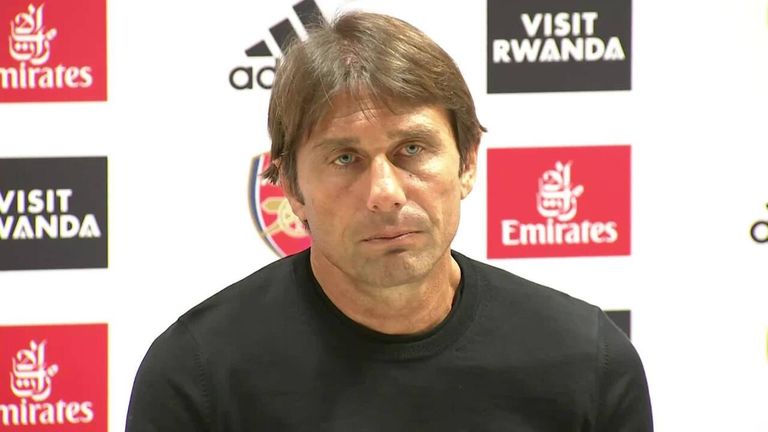 Tottenham manager criticised the VAR in the Premier League after his 10-man team lost 3-1 to rivals Arsenal, with Emerson Royal sent off.

Antonio Conte to BT Sport: “I think we had the opportunity to do much better in the first half. Instead, we kept the game in balance. I think we made big, big mistakes in the last pass, also easy passes.

“We could do much better [with Arsenal’s second goal] and the red card ended the game, it was difficult for us.

“Especially after the [international break], it is a bit difficult because you don’t have a lot of time to prepare for the game.

“Now we have to move on because we lost against Arsenal, but we know our role in this league.

“We have to try to do our best, to try to stay close with the top teams.”

Aaron Ramsdale was unable to stop Harry Kane’s penalty but looked assured in goal for Arsenal otherwise, pulling off a fine stop from Richarlison in the first half.

Bukayo Saka also impressed following his eye-catching cameo in England’s 3-3 draw with Germany, while there was also a solid showing from Ben White, who still hopes to force his way into Gareth Southgate’s thinking before the World Cup.

Kane’s penalty took him to seven Premier League goals this season, but it was a more difficult afternoon for Eric Dier, who impressed on his return to the England squad but struggled to cope with Arsenal’s fluid attack at the Emirates Stadium.

Arsenal host Bodo/Glimt in the Europa League on Thursday at 8pm, while Tottenham travel to Frankfurt in the Champions League on Tuesday at 8pm.

Tottenham then travel to Brighton on Saturday Night Football at 5.30pm, before Arsenal host Liverpool on Super Sunday at 4.30pm – both live on Sky Sports Premier League.