Arsenal’s three-game winning run came to an end at Brighton as the teams played out a 0-0 draw in wet and windy conditions at The Amex.

In a game that produced 29 shots, 21 of those from Brighton, both teams were guilty of lacking a clinical final finish as Pierre-Emerick Aubameyang hit the post for the Gunners and Shane Duffy squandered the hosts’ best chance late on.

The stalemate means another clean sheet for the Arsenal defensive axis of Aaron Ramsdale, Gabriel Magalhaes and Ben White, who have now conceded just one goal in four Premier League games. Ramsdale had to be at his best in the final 10 minutes, making three saves to help his team to a gritty point.

The result leaves Brighton in fifth place ahead of the international break and Arsenal in ninth.

Man of the match: Gabriel

How Arsenal ground out a point in Brighton…

Fresh from their impressive 3-1 win over Tottenham in the north London derby, Arsenal started with plenty of energy and Bukayo Saka broke free of Dan Burn on the right and tested Robert Sanchez with an early low drive.

It took Brighton 15 minutes to get to grips with Arsenal’s confident play, Leandro Trossard signalling their arrival to the match by flashing an effort past Ramsdale’s far post from a tight angle.

Wayward finishing was a common theme as Brighton posted eight shots on goal before the break – all were off target despite some great positions. Perhaps the best chance fell to the in-form Neal Maupay, whose acrobatic effort on goal from 10 yards looped wide of the far post.

Aubameyang cut a frustrated figure for large parts of the game but his finishing skills almost had Arsenal in front on 23 minutes. Saka’s deflected cross from the right was bravely won by the striker from a tight angle but his header struck the post and bounced to safety.

Seagulls defender Burn then headed another good chance over before top scorer Maupay hooked narrowly off target for the second time.

Arsenal began the second period with renewed purpose with Emile Smith Rowe finding some nice pockets of space, yet there was little sign of the stalemate ending.

Lacazette and Thomas Partey combined to send Smith Rowe racing towards goal with 14 minutes remaining but his low effort was turned behind by the legs of Sanchez.

Buoyed by the home crowd, Albion ended in the ascendancy. Duffy almost gave them the grandstand finish but nodded wide from a corner.

Man of the match: Gabriel

Gabriel Magalhaes exclusively spoke to Sky Sports’ Nick Wright in the week about how a “year of learning” is helping him blossom at Arsenal, and here was further evidence of his rapid development with another impressive defensive performance. More often than not it was Gabriel’s head first to the contact in the Arsenal box – such an important part of keeping Brighton quiet due to their strength from set-pieces. Along with Ben White, who made a match-high seven clearances, the Brazilian’s influence was massive and was a huge reason why Arsenal came away with a point in their satchels.

Brighton boss Graham Potter said: “The performance was fantastic. I loved our intensity, our courage. I thought it was a wonderful performance and I’m really proud. The hardest part of football is putting the ball in the net but we tried everything. Sometimes you don’t get what you deserve, but that’s life. We can take a lot from the performance.

“We’ve been playing well for a while and our performances are consistent. Lots of our performances last season were good but we weren’t getting the result so I had to answer questions on that which is normal. That was a step up in performance today. It was as close to perfect as you can get, especially in that first half.” 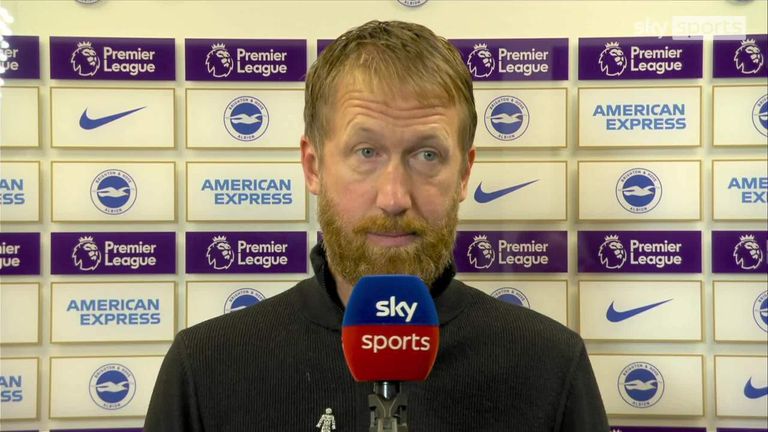 Graham Potter says his Brighton put in a fantastic performance against Arsenal and rued all their miss chances during their 0-0 draw.

Arsenal boss Mikel Arteta said: “I think it’s a point gained because I don’t think we deserved anything more than that. If we did deserve. We never felt in control of the game. We struggled to break the press. But we did defend well in the last 15-20 metres of the pitch. It was a performance where we need to improve in other areas. We struggled to break down their man-to-man press and lost a lot of duels. We didn’t take the game where we wanted to take it and we were uncomfortable.”

After the international break, Brighton have a trip to Carrow Road to face Norwich on Saturday 16 October (3pm). Meanwhile, Arsenal are in action on Monday Night Football on 18 October where they have a reunion with Patrick Vieira, now manager of Crystal Palace.