Carlo Ancelotti could find himself even higher in the interests of both Everton and Arsenal in the near future, as reports in Italy claim the legendary boss could be sacked by Napoli as early as this week.

The 60-year-old three-time Champions League-winning coach has been in charge in Naples since the start of last season. While he led them to a strong second-place finish last season, a controversy-ridden start to the 2019/20 campaign sees them already sitting 18 points off top spot in seventh.

Napoli have fared better in Europe this season, and sit undefeated with nine points from their five games. They require only a point against Genk in their final fixture to qualify for the Champions League last 16, but will do so regardless if Red Bull Salzburg fail to beat Liverpool in Austria. According to Gazzetta dello Sport (via ​Sport Witness), however, should they fail to make the knockout stages of the competition, it’s likely Ancelotti will be sacked on the spot come Wednesday – an eventuality which would free him up to take over at either Everton or Arsenal – both of whom have been loosely linked with the Italian in recent weeks.

Both Premier League clubs are in search of a new permanent manager after poor respective runs saw both Unai Emery and Marco Silva face the axe, with Freddie Ljungberg taking interim charge at Arsenal while Duncan Ferguson, who inspired the Toffees to a 3-1 victory over Chelsea at the weekend, has the short-term reins at Goodison Park.

It’s Everton who have been ​most heavily linked with Ancelotti, although David Moyes, Vitor Pereira and ​more recently Unai Emery look more likely to be given the job there.

Should Ancelotti end up leaving Napoli, however, the situation could quickly change, as a clear run at one of the most decorated coaches in football, with no outstanding concerns regarding compensation, is not an opportunity to be sniffed at. 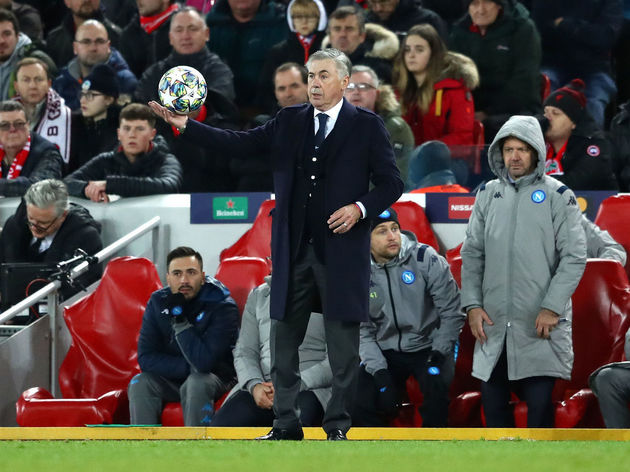 The same story could be true at Arsenal. They ​prefer Mikel Arteta, while Niko Kovac is ​believed to like the look of the hot seat there, but they too could be persuaded by Ancelotti’s new-found availability.

It does look likely, regardless of their Serie A struggles, that Napoli will advance in Europe. Reports from Italy indicate that could be enough to earn him another week or two in the job, but  things do change fast in football.