Lens in France’s far north, with a population of just over 35,000, may seem an unlikely hotbed of footballing talent, yet the industrial Picardie town has produced a number of France’s most talented players in recent years.

Hewing defensive rocks has been a particular speciality of local club Racing Club de Lens, with a number of notable figures progressing through their system to enjoy excellent careers. Rod Fanni arrived as a young professional from Martigues and has gone on to earn international honours, while more notably Raphael Varane is currently establishing himself as one of the world’s elite centre-backs with Real Madrid.

Serge Aurier may not quite enjoy the standing of his 20-year-old former colleague, yet the current Toulouse defender is poised to become Ligue 1’s next major export.

The Cote d’Ivoire international, who has made four appearances for his national side since breaking into the team last year, has already established himself as one of the kingpins of Alain Casanova’s defence in the Pink City, yet it is not necessarily his defensive attributes that have caught the eye.

Aurier is capable of playing in the heart of the back four, though it has been as a right wing-back that he has shone to the greatest extent.

Against Lorient last weekend, he was instrumental offensively in a 3-1 victory. Wissam Ben Yedder may have caught the headlines with a goal and a couple of assists, but it was the adventurous defender who offered his side the width required to overload opponents reduced to 10 men early in the game. Aurier would even score what proved the match-winning goal, and he would have a significant hand in another.

This storming showing was no flash in the pan, though. Despite his defensive standing, Aurier has had more shots on goal than anyone else in the Toulouse side, excepting strikers Ben Yedder and Martin Braithwaite, while his tallies of three goals and four assists are impressive statistics for a player who has made 12 of his 21 appearances this term in the middle of the defence.

Given these formidable statistics, it is little wonder he has been strongly associated with a summer move to Arsenal as a replacement for Bacary Sagna, whose contract expires in June.

Certainly, Aurier is an archetypal Arsene Wenger signing. A powerful and athletic runner, he offers a strong technical level, particularly when his physical strength is considered.

And simply because he is a daunting attacking specimen does not mean he is a weak link defensively – and it is these attributes that will likely be to the fore on Sunday lunchtime when Toulouse play host to in-form Paris Saint-Germain.

Unlike recent Chelsea signing Kurt Zouma, who will spend the rest of the season with Saint-Etienne, Aurier has a strongly developed positional sense. For such a young player, he has a commendable level of concentration and does not tend to neglect his defensive responsibilities to make gung-ho runs forward. 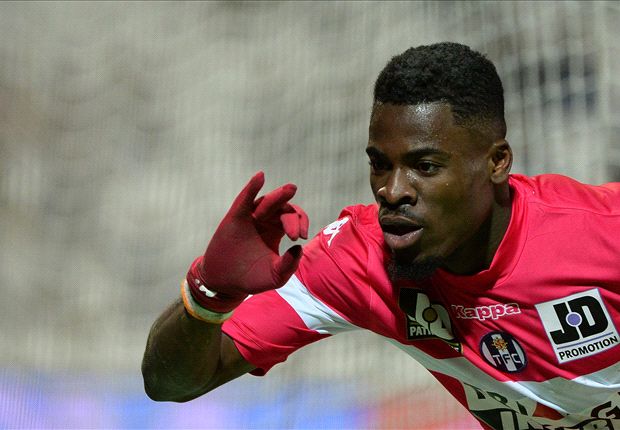 While some modern full-backs can appear more concerned about looking flashy going forward, Aurier is a defender who actually enjoys defending. He does not tend to needlessly neglect his post at the expense of making dashing runs forward, while he is a strong tackler and a convincing presence in the air.

In terms of his discipline, he is a player still developing, as he freely admits. “I have a problem with the yellow jersey [the referees],” he explained after a scoring display in a 2-2 draw with Marseille on February 2. “I try to keep myself as far from them as possible – I think I’ve made some progress.”

However, Casanova has seen enough in the youngster to hand him the skipper’s armband on occasion. “He has been captain and he will be again, here or somewhere else as he has contagious enthusiasm,” the head coach stated, though he warned his player “could do better managing his emotions”.

The former goalkeeper, though, was largely glowing in his praise. “He has huge potential. Frankly, I wish I could have a clone,” he concluded.

With a plethora of experience already behind him – Aurier has played nearly 100 top-flight matches – he is a player who offers instant quality but with the potential for further long-term development, and PSG must be wary of him at both ends of the field in Sunday’s clash.