Attempting to play his captain through on goal to give his side some a route back into the game against Brighton, Joe Willock’s effort failed to reach his intended target. It was a poor pass.

He was lambasted, screamed at​ and made to feel worthless for his efforts by Pierre-Emerick Aubameyang. He is just a kid.

What that did was set the tone for what was to come. Willock was hauled off at half time probably feeling even lower than the Arsenal fans right now who are seeing their side endure their worst run of form that any of them have likely seen in their lifetimes; 42 years, to be exact.

The bitter irony of seeing players throwing their arms in the air when a mistake is made or a goal is conceded is that the only time a player did so with justification was when Granit Xhaka was jeered off the pitch against Crystal Palace.

This team is shot. Confidence is a distant dream. And the top four is a false hope.

The days of Arsene Wenger and Unai Emery have gone, but it appears with each passing week new issues bubble to the surface.

Freddie Ljungberg is an ​Arsenal legend. A figure adored by the supporters for his part to play in the glory years, none less so than the fabled ‘Invincibles’ squad. His stock is high among supporters, but even his most ardent fans know that he isn’t the man to lead this club going forward.

In 180 minutes as a ​Premier League manager, he’s accrued a solitary point against Norwich and Brighton. Hardly enough time to begin criticising the man, but even the most inexperienced of interim coaches would’ve fancied their chances of six points from those games. 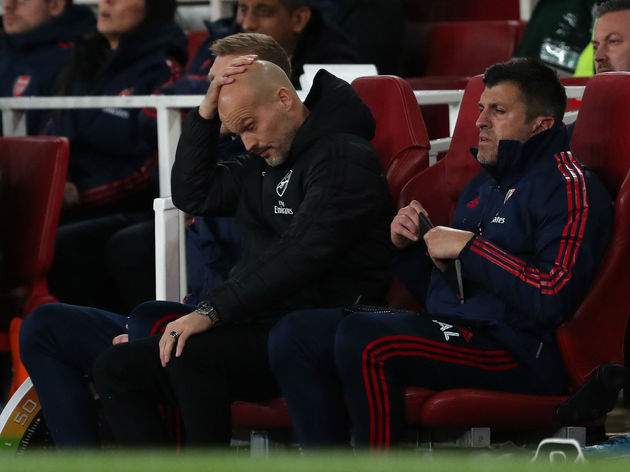 Getting his formation and personnel right was key against Brighton, something, he didn’t do. Aubameyang played on the right, ​Mesut Özil

If Emery had picked that lineup, there would have been uproar. Simply put, Freddie got it wrong. That said, you can’t help but feel, not matter who he played, the end result would have differed little.

​Arsenal are in meltdown.

Confidence is imperative in football. Believing in yourself and your teammates account for significant measures of success. It’s the drive that gives players that extra edge in everything they do. But now, Arsenal have tipped over the edge of crisis, and are in free fall. The word ‘confidence’ doesn’t appear in the Gunners’ dictionary.

Recruitment also comes to the fore. At full-back there are two players in that squad who the club’s fans were pinning all their hopes on to bounce back from their early-season wobble: Tierney and Hector Bellerin. They have done little to aid the cause, though, because they’ve been thrust into a side devoid of hope and imagination beaming with poor signings stemming back multiple transfer windows. At the heart of defence, it speaks volumes when Shkodran Mustafi was brought in for Sokratis at Carrow Road, only to then be shunned from the squad entirely against Brighton. Two players who wouldn’t be anywhere near Brighton’s backline.

Defensively Arsenal are ​abysmal. It’s relegation form the club find themselves in, but it is Championship level defending that’s leading them there.

Bernd Leno cuts a forlorn figure every game, doing his best to keep his side from falling further behind in matches in which they simply aren’t competing. The German has made a Premier League-high 66 saves this season, while the Seagulls’ Mat Ryan sits second on 54. On Thursday night, Arsenal conceded 20 shots at goal, compared to ​Brighton’s 12.

Arsenal have conceded 82 shots in three games this season against Watford, Southampton and Brighton. In the same games they had just 31 shots themselves.

That is truly staggering, especially when you consider two of the games were at home. What an inexplicable mess.

Major surgery is required to amend this period, but does anyone expect the Arsenal board to attempt to fix that over the winter window? Their primary target right now is putting points on the board, but it is the board upstairs who should be taking notes.

There was hope that Ljungberg would steady the ship and provide the incoming manager with a platform from which to build. Instead, whoever enters the fray is doing so with an even more daunting task than when Emery replaced the much-maligned Wenger.

The search for a new permanent head coach has to be stepped up; with a gruelling winter fixture list awaiting the Gunners, it will require experience of the highest order to see Arsenal through this stretch – with financial backing in January an essential, not a desperate plea.

However, none of that will occur unless the players themselves don’t take responsibility. The repetitive narrative that hangs heavy over the club is yet to be resolved, as the leadership issue became even more poignant following ​Aubameyang’s outburst.

A win has to come from somewhere. Whatever minor reserve of dedication and desire these players may or may not hold needs to be put on show away at West Ham on Monday. Ljungberg will still be in charge for that match, and he will still have the same players at his disposal at the London Stadium. No outside help for this.

Ahead of that frighteningly crucial fixture, a plethora of questions still remain unanswered. West Ham are a team

From the outside in, punters and supporters alike are all expectant of another crushing loss. These players are facing arguably the toughest spells of their careers, while the fans are witnessing the worst run their team has played since 1977. The Hammers are up next, but they could very well be the ones to hammer the final nail in the coffin that is Arsenal’s season.

All that can change is what happens on the pitch, be it tactically, mentally or both. You get the sense that defeat in east London could spell the end for this crop of players. They’re sinking along with the club, and if their agents aren’t already seeking a move away it’d come as a distinct surprise, because they don’t appear to be up for the cause.

If that suggestion isn’t, it needs to be proved otherwise fast, as results could go as such that Arsenal will find themselves dangerously close to the bottom three. Equally, they could be seven points off the top four after Chelsea’s defeat against Everton.

But that’s all irrelevant. Stopping the rot is all that should be on the players’ minds. Never mind the board’s failings in the transfer market, never mind an owner who distances himself from the club at every opportunity, never mind who may take over in the dugout, and stop thinking about the top four. Take to the pitch and put in a performance that warrants a result, or at least offers a glimmer of hope.

This isn’t a rallying cry, this is a cry for help. Something has to change.