Arsenal face a monumental task on Tuesday when they travel to the Allianz Arena to take on defending European champions Bayern Munich for a place in the last eight of this season’s Champions League.

Bayern cruised to a 2-0 first-leg victory over the Gunners in north London last month and will be confident of completing the job on home turf this week.

Pep Guardiola’s men have been in scintillating form in recent weeks, having notched an astonishing 33 goals in their last eight matches in all competition and, with Bayern in superb scoring form, it is little surprise to see their attacking options short-priced to find the net against the Gunners.

Croatian striker Mario Mandzukic has scored 16 goals in 22 games for Bayern in the league this season but, somewhat surprisingly, has scored just once in five outings for the German giants in the Champions League.

Thomas Muller has notched five goals in his last three appearances for Bayern – including a goal in the first leg in north London last month – and the 24-year-old is likely to prove popular with punters at William Hill’s 3/1 (4.0) quote to net first here.

William Hill go just 8/11 (1.73) on Muller scoring at any time on Tuesday but that price looks to be too skinny here.

Better value, perhaps, may lie in backing Dutch winger Arjen Robben to find the target for the defending European champions in Munich. The former Chelsea star, of course, notched the winning goal against Borussia Dortmund in last year’s final at Wembley and, more recently, bagged an impressive hat-trick in the 5-1 demolition of Schalke at the beginning of this month.

Robben is just 4/1 (5.0) to score first but the even money (2.0) quote for the 30-year-old to find the net at any time against the Gunners certainly looks to be generous here. 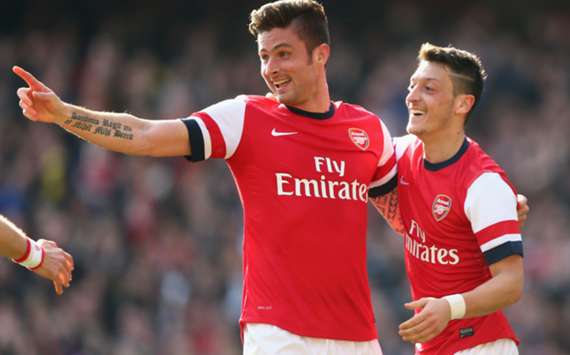 If Arsenal are to stand any chance of overturning the first-leg deficit, they will look for a big performance from top scorer Olivier Giroud.

Mesut Ozil, who missed a penalty in the first-leg at the Emirates last month, is a chunky 14/1 (15.0) with William Hill to make amends by opening the scoring on Tuesday while the same firm go 11/2 (6.50) for the German midfielder to find the net in Munich.

However, with Guardiola’s side likely to be on the front foot for long spells, it is the even money (2.0) quote from William Hill for Robben to score at any time during Tuesday’s tussle which is most tantalising.