Mikel Arteta dedicated Arsenal’s emphatic north London derby victory to the club’s supporters after they generated an atmosphere as special as his side’s performance against Tottenham.

Emile Smith Rowe, Pierre-Emerick Aubameyang and Bukayo Saka all struck in a dominant first-half blitz as the Gunners leapfrogged Spurs in the Premier League with a resounding 3-1 victory on Sunday.

It was Arsenal’s third successive league victory and drew an emphatic line under their difficult start to the campaign which saw them lose their opening three games.

“This win is for the fans,” Arsenal manager Arteta told Sky Sports. “They were incredible in tough moments when we needed their support.

“It doesn’t get much better than the atmosphere we saw here today. It was one of the nicest feelings I had, certainly in this stadium.

FREE TO WATCH: Highlights from Arsenal’s win over Spurs in the Premier League

“It was a big occasion, to win it the way we did, and to feel that connection with team and supporters made it really special.

“It’s impossible to attract people and connect with what we’re trying to do if we don’t have fans here. It makes such a difference. We want to entertain them and play in a way that makes them proud.”

On a momentous day for Arsenal’s youth, Smith Rowe (aged 21) and Saka (20) assisted one another for the fifth time in the Premier League, a record for a duo aged 21 or younger only bettered by Cristiano Ronaldo and Wayne Rooney’s tally of eight.

“It’s probably the best day of my life,” Smith Rowe added. “To have my family here as well, it’s a special feeling.

“The fans have done so much for us today and we want to thank them as much as we can. I feel like we’ve worked so hard. We had a tough start to the season. I feel like it’s going really well at the moment but we need to keep our heads down.” 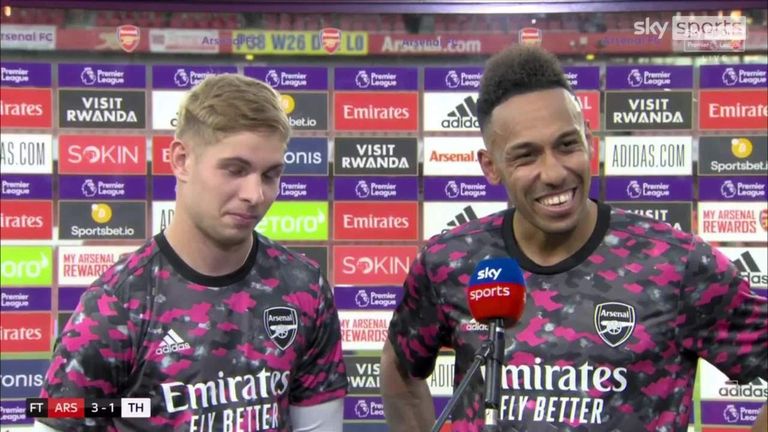 By the time Spurs mustered a response to Arsenal’s first-half salvo, the game was already beyond their reach, with Heung-Min Son’s late goal scant consolation.

After winning the first three games of the campaign, defeat at the Emirates saw Spurs become only the second team in Premier League history to lose the following three after Everton in 1993/94.

Nuno conceded his team selection put players on the pitch who were unable to carry out his game plan, though he stopped short of naming names.

“I’m going to be honest,” the Spurs boss added. “When you have a game plan you have to make the right decisions in terms of who you want on the pitch to develop that game plan.

“We were not aggressive enough to control Arsenal in midfield. They were faster, stronger, more aggressive. We suffered when we wanted to go in front, and we allowed Arsenal to come to us. Bad decisions.

“It’s not easy to expand so I just ask you a bit of respect if I don’t go too much into it. But the game plan didn’t work out. I will not judge my players in front of you, I refuse to do that.”

Gary Neville gives his thoughts on Tottenham’s performance in their defeat to Arsenal in the north London Derby, describing Harry Kane as not looking right and seemingly unhappy

Tottenham captain Hugo Lloris, who made his 19th north London derby appearance, was equally frank in his assessment, admitting his team were smashed by Arsenal.

“We lost complete control in the first half,” the goalkeeper said. “We got smashed and then had a good reaction.

“It’s frustrating and very disappointing. It’s the moment to stick together and carry on. The players were ready, but we lost a bit of control. We lost the balance in the middle of the pitch.

“When you concede three goals in each of the last three league games you cannot hide the problems. But we are professional. There is a long way to go. We need to stay calm.”