Arsene Wenger’s men seem to be hitting form just at the right time, and Al Hain-Cole expects them to easily see off a visiting side who have won just once on the road

With neither Chelsea nor Tottenham in Premier League action this weekend, Arsenal go into their game against Norwich knowing that victory would see them leapfrog their London rivals into third place.

Arsene Wenger’s side always seem to come together at the business end of the season, and are proving true to form with three consecutive league wins following their memorable Champions League victory away to Bayern Munich. 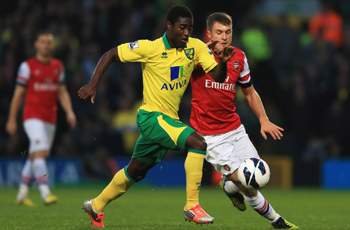 With the wind in their sails, The Gunners are firm 1/4 (1.25) favourites with Paddy Power to clinch all three points on Saturday.

In contrast, the visitors have won just once in their last 15 league games, and are huge outsiders at 10/1 (11.00) to wrap up a shock double over Wenger’s men this season, having beaten them 1-0 at Carrow Road in October.

Half of the Canaries’ 14 winless games in that period have ended in a draw, and you can get odds of 5/1 (6.00) on them picking up a valuable point at the Emirates.

Although they have pulled off some memorable scalps in front of their own fans season, including wins over Manchester United, Tottenham and Arsenal in all competitions, Chris Hughton’s side have not been so successful on the road. 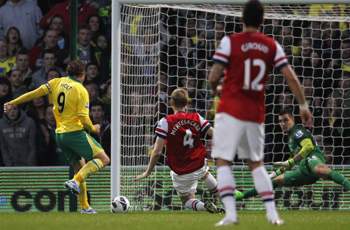 Norwich have won just one league away game all season, and have come away from trips to Anfield and Old Trafford on the back of 5-0 and 4-0 thrashings since the turn of the year.

Having recorded convincing 4-1 and 5-1 wins over Reading and West Ham in recent home games, the confident hosts are more than capable of putting their guests to the sword here, and odds of 4/6 (1.67) look very tempting on them winning by at least two goals.

One man that Wenger’s men will be wary of is Grant Holt, who has scored in each of the last two meetings between these sides, and whose aerial prowess could prove a threat in the absence of the suspended Per Mertesacker.