Two wins from their last 13 matches in all competitions have seen Newcastle slide down the Premier League table to 15th place, and things do not get any easier for the Magpies as they travel to Arsenal on Saturday evening.

Boxing Day saw Alan Pardew’s men become the latest team to be on the end of a Manchester United comeback, with their 4-3 defeat at Old Trafford extending their winless run on the road this season. 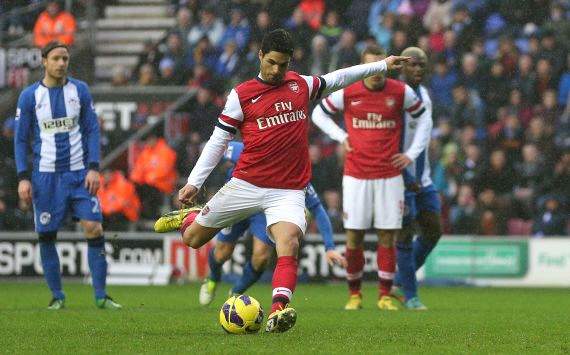 Yet given the current form of both sides, the best bet for this encounter looks to be backing both teams to score at 4/6 (1.67).

While Newcastle have been struggling in the points department of late, particularly away from Tyneside, they have had little problem in finding the back of the net.

Indeed they have managed to score in seven of their last eight away games in the Premier League, including of course those three goals against Manchester United.

Arsenal for their part have conceded goals in five of their last seven league games at the Emirates, and remain somewhat unconvincing defensively.

The price is not the biggest yet, the statistics back this bet up, and it looks to have an excellent chance of paying out.

If Arsenal look like conceding then the man with the best chance of getting Newcastle’s goal is Demba Ba and with the Senegal international already having netted 11 times in the top flight this season, the price of 11/4 (3.75) for him to score at any time looks like a solid choice for a value bet.

Phil Kitromilides is a sports broadcaster working on radio and TV in London and Madrid. You can also follow Phil on Twitter.